I’m just jumping straight to the point: my 11th half marathon was tougher than the 10 before it combined. I was expecting an easy, low-pressure race in the middle my marathon training cycle…boy was I wrong. A few curveballs completely out of my control happened, and this race ended up not going to plan at all.

The alarm clock went off at 6am, a later-than-usual wake-up call for a race. I got 9 hours of sleep and my energy was high. I ate my usual pre-race breakfast of plain oatmeal + a banana, but no coffee this time. All my morning runs have been caffeine-free (which has been a really postitive change for me), and I figured I didn’t need caffeine for this race either.

The race took place in Richmond CA, which was a short 30 minute drive from my apartment. I gave myself too much time and ended up at the race, all checked in and ready to go 45 minutes before the start. Nevertheless, it was nice to have some down time to relax, check out the booths, and watch the sunrise. It was COLD.com so I made sure to keep my muscles warm!

Finally, it was time to painfully take off my layers and line up at the start. The race was held by Brazen Races which is a small, local running company. I was pretty shocked by how much more low-key and casual these smaller races are versus the big international races I usually do…there must have only been 300 runners for the half marathon. My energy/bladder/hydration/fueling/music was good to go and I was excited to get this race started!

I charged out of the start line super fast for the first 2 miles. I knew I couldn’t sustain that pace but couldn’t help but indulge in the race excitement just a little bit. 😉

Immediately, I could tell I was in for a treat…the course was absolutely breathtaking in the scenery: right along the water in East Bay with views of the city, gorgeous waterfront houses (#lifegoals), and a clear sunny sky above all.

I felt in my gut that I was having a strong running day, physically and mentally. But I guess I assumed too soon…

Everything went downhill mile 4. Out of nowhere, a painful stabbing feeling took over my lower abdominal area. It didn’t creep up slowly, but rather it was a split-second BAM! I never experienced anything like that in my life – it wasn’t really in my ab muscles but behind them, like a pain in my organs that spread throughout my torso. It wasn’t like a typical side stitch or period cramp that I know how to deal with…this was 10x more painful and completely consumed me.

I told myself to KEEP RUNNING, because if I stopped, it would be that much harder to pick up again. My pace went down dramatically as I was trying to gently jog and take deep breaths while working through the pain.

After a few minutes I ran off the race path to find a public bathroom…I was desperate to sit down and do anything to relieve the pain. After taking a short break and drinking some water, I returned to the race, but the feeling just got worse and worse.

By mile 5, I had to stop running. Every step felt like I was “pressing” down on the pain, and it was EXCRUCIATING. I was dizzy, nauseous, even walking was a struggle. Every part of me wanted to lie down, but since this was a small race I knew that wasn’t an option. There weren’t any volunteers or spectators to help me, and I needed to keep walking in order to get help at the next aid station.

Miles 5-6 were the lowest point of the race. I was frustrated, demotivated, and let negative thoughts fill my head as the 2:00 pacer passed me, then 2:10, then 2:20, even 2:30. I was LITERALLY seeing my time goals pass me in front of my eyes…

I cried. It was SO frustrating thinking that everything I worked for was out the door for something out of my control. Why was this happening to me, and why NOW? Why couldn’t my body deliver this pain before after the race?!

As runners passed me and saw my face dripping in tears, they were encouraging and cheered me on…I was so grateful and amazed by this camaraderie among runners.

Around mile 6, I hate to say this…but I mentally quit. I decided that I was going to DNF the moment I saw the next aid station. This was the worst moment I’ve ever had in any race of my life. That feeling of deciding to give up; that I wasn’t going to reach my goal or anywhere near it; that I wasn’t enough. I don’t even know how to put in words how crushing that feeling is…

Since this was a small race without many volunteers or support, I had to walk quite a while to get to the next water station (try 3 miles of nothingness…). In the moment I was like WTF but looking back it was actually a blessing in disguise because letting some time pass lessened the pain. The pain went back and forth between “so unbearable I can hardly walk” to the original “this really hurts but at least I can lightly jog”, so whenever I felt like I could jog, I took advantage and did.

At mile 7, I approached a water station. FINALLY. I took a break with the volunteers, and then it was time to decide whether to quit or keep going, since who knew when the next station was. Seeing how much the pain improved was a nice surprise and maybe I didn’t need to quit. However I was so mentally checked out –> making that decision to quit earlier was so emotionally draining that I wasn’t sure if my heart was ready to commit back into the race…I don’t want to sound dramatic, but that really was the debate I was having in my head…

I think the defining moment was when I let my emotions consume me for a bit…I felt so defeated not just by this situation, but also from some tough things that happened in my personal life the past week. At one point, I just snapped out of it and said NO. I was not going to let this race defeat me. I was going to defeat this race. Even if I had to crawl on my knees to finish line, I could do it. I was enough. Plus I really needed this win given everything going on personally…

From that point, I committed. It also helped that my pain was down like 50% of what it was before.

Thanks the LORD the pain faded away over time. By mile 8 I was running at a steady pace again, and by mile 9 I was in full on race-mode. It’s funny how after the pain goes away, you kind of just forget about it and almost find it silly that you were planning on quitting? Still, as I write about the race, I don’t want to downplay the emotions of that difficult stretch…just out of fairness and kindness to my past self 🙂 Does that make sense?

The end of the race took place in some really gorgeous shady trails, and then back on the waterfront again. It was SO much more pleasant to just deal with the usual pains of a race (sore legs, tired feet, low energy…) versus the unexpected pain from before. And so the last few miles were definitely a highlight, despite being difficult in its own way! Mentally I was feeling strong.

Crossing the finish line was incredibly emotional for me – I just remember thinking “you’re strong girl.” Moments like that are why I live and breath this sport. 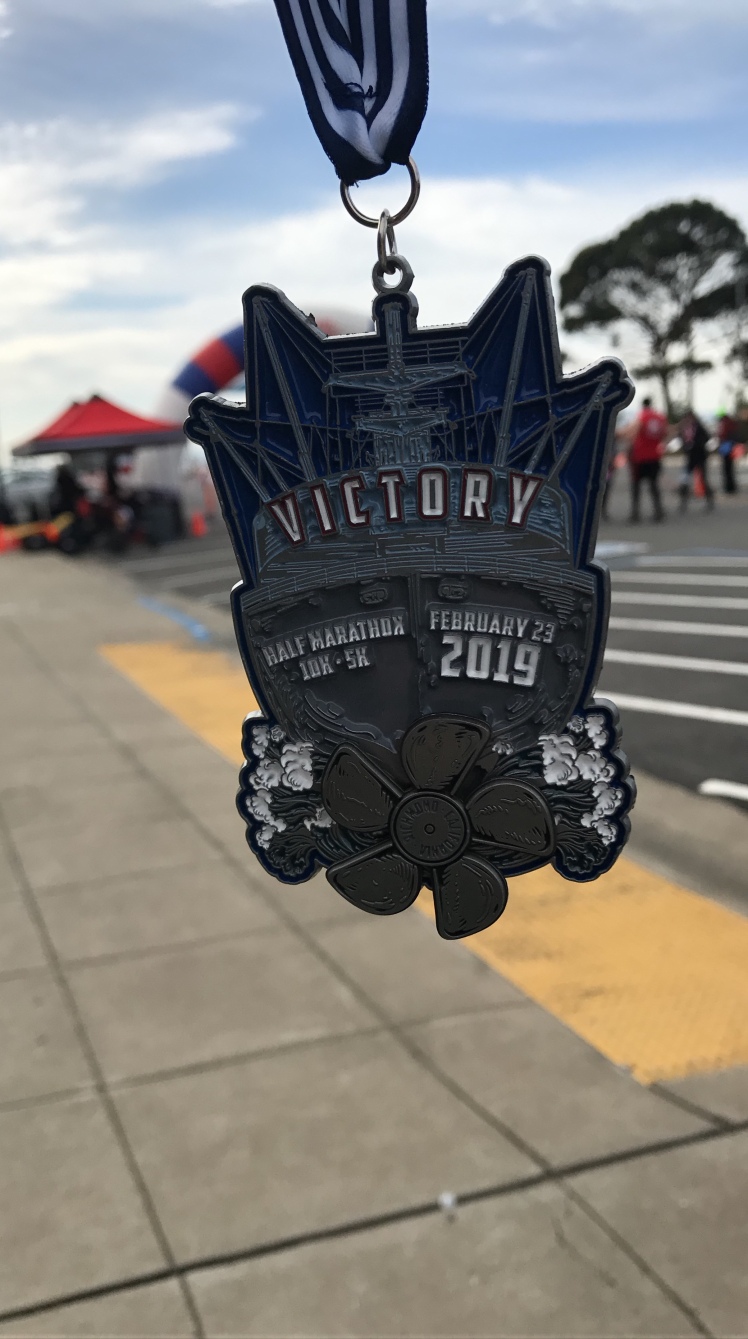 My favorite part of Brazen Races…the FOOD. Look how much they provided to all the runners! My first bite post-race was a big ol’ brownie – I deserved it!

Even though I look back on this race thinking “what a HOT MESS.” I also look back with so much gratitude over the whole experience. In my last marathon training post, I felt like I hadn’t built enough mental strength yet…well I guess I spoke too soon. This race showed me that I am strong, and I can do hard things. Digging deep to push through the pain and negative thoughts makes that much more equipped for marathon day.

Even though I didn’t reach my time goal or anywhere near it – I honestly think that moment of crossing the finish line feeling so darn grateful and proud of myself was more rewarding than a PB. So I’m not looking back at this race as a huge disaster, but rather a huge blessing. 🙂