For the second half of my trip, I said goodbye to the mountains and savannahs inland of Kenya and said hello to the beachy coast. My first stop was Mombasa, Kenya’s biggest port city, and in a few short days I’ve quickly grown to love the slower, steamy vibes on the Swahili coast of Kenya, while also experiencing some difficulties being a solo female traveler in East Africa.

Getting from Naivasha to Mombasa was a decent trek, involving a 2-hour car ride to Nairobi and then a flight to Mombasa. The moment I got off the airplane as I rode through town, the hot and steamy climate hit me in the face, and I instantly got the vibe that Mombasa was would be more light-hearted and tropical than other spots so far.

First stop was checking into my hostel, Tulia Backpacker’s Hostel. Tulia’s is a spacious, social and laid-back hostel in neighborhood Nyali, which much quieter and a bit removed from the bustling downtown Mombasa. I met one of my dorm-mates and we decided to hit up the beach first thing.

The beach was a few blocks from the hostel, and I was instantly impressed. After living in California, beaches rarely wow me anymore, and I honestly didn’t have super high expectations for beaches in Africa, but the crystal blue water of the Indian Ocean along with the white sand made for quite a relaxing, beautiful scene.

We went for a swim and had a little photo shoot at golden hour.

Showing off my gymnastics skills 🙂

The rest of the evening was a chill one. We went for burgers at a mall nearby (my first non-Kenyan meal this entire trip which I so appreciated) and relaxed back at our hostel.

The next morning, I had some breakfast at a cafe nearby and then took a tuk tuk to Haller Park, a large park nearby known to be a quiet oasis from Mombasa city filled with animals. 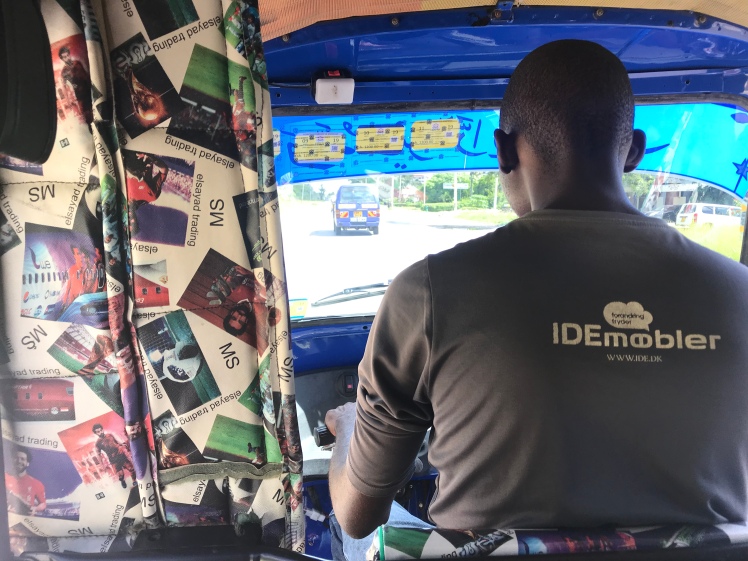 Did you know you can call a tuk tuk from the Uber app in Kenya? What a world we live in. 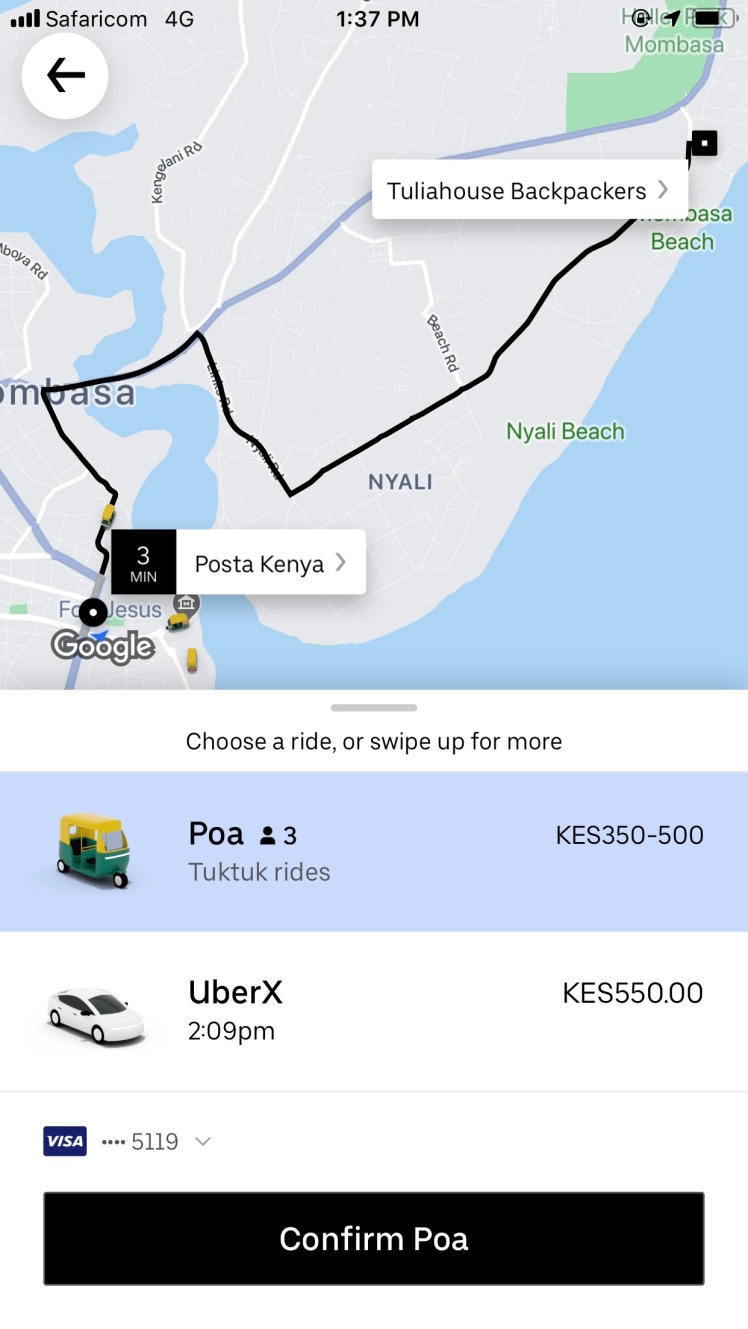 The park itself was more like a lush and green zoo, and it was just nice to be outside. We saw different animals that I hadn’t seen on the safari like these crocodiles and huge snakes.

Also some familiar animals – probably the 200th giraffe on this trip.

This tortoise is over 150 years old!

This monkey species had blue balls 😛 made me laugh. 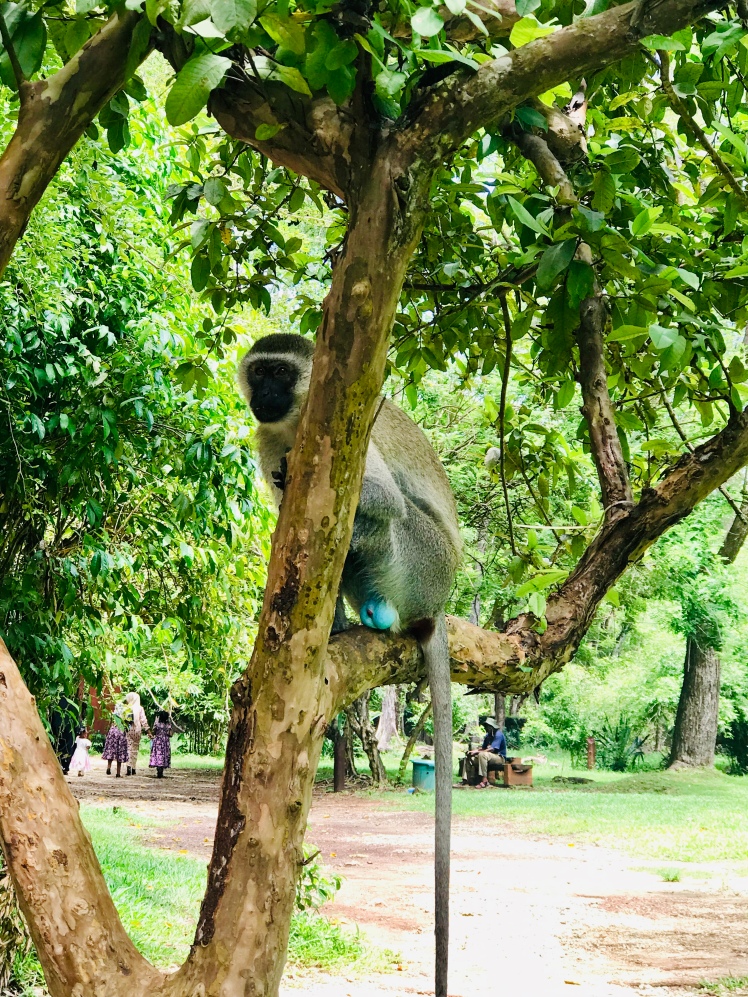 There was a butterfly garden too.

After a few hours at the park, I had some downtime at the hostel, napping and catching up on my phone. I love that Mombasa has helped me slow down and be okay with having time to myself, compared to the packed itineraries in the beginning of the trip.

Later on, I decided to take a walk by myself along the same beach as yesterday. This time it was packed to the brim with locals. I got a $12 massage (which was heavenly) and then took a walk along the beach.

The walk was pretty frustrating. Imagine the density of NYC with everyone is staring at you, and literally every man approaching you to talk to you. Up to that point, I believed if a local makes an effort to say “hello” in their second language, it was rude to not say hi back, and so I would respond when I was in different countries. However in Mombasa, I quickly realized I was being too friendly because returning a “hello” opened the flood-gates to men harassing/following/grabbing me…I honestly just wanted to walk in peace and it was really hard to do so with all eyes on me. I didn’t even feel comfortable swimming in my bikini, so I left after a bit.

From that point on, I decided I was going to ignore men when they said hi and not feed into it anymore. Ignoring them felt rude, but I had to do it and even so men would still follow me and harass me until I firmly said to leave me alone.

I think a combination of me being alone, female, and Asian-looking (which you never really see on the backpacking trail, let alone in Africa) drew so much attention from men.

The local women, however, I found to be very pleasant and warm.

I retreated back at the hostel and a lot of people were hanging out. I cracked open a beer and got to know some more friends at the hostel as well as the owner and his friends. A nice light-hearted end to the day.

I was very excited for the itinerary today. Mombasa is a pretty big bustling city, and after two days of relaxation, my plan was to head into town and do some cultural site-seeing in the city.

First stop was Fort Jesus, which use to be a port and prison for East African slave trade to Arabia, and now is a UNESCO World Heritage site.

I was eager to learn about the history of the fort, but was a bit overwhelmed with the aggressive men fighting to be my tour guide outside the entrance. I decided to see it on my own, but one man kept following me and told me he would lead me to the entrance, and so I gave in and let him take me. We walked into a dark ally that was clearly not the entrance since there were no other tourists around…I asked to see his official badge and he said he left it at home, and then I walked the hell away.

Up to that point, I was really fed up and had a hard time trusting men in Mombasa. Also the previous night, an African person who I thought was my friend came onto me physically while I was asleep (I was the only girl in a 10-person mixed dorm), despite knowing I wasn’t single and being married himself.

I was really frustrated and took some time to regroup, and then I moved on. I wasn’t going to let this ruin my day.

The inside of Fort Jesus was really pretty, with fading stone architecture and views of the water. I took my time just soaking in the sites. 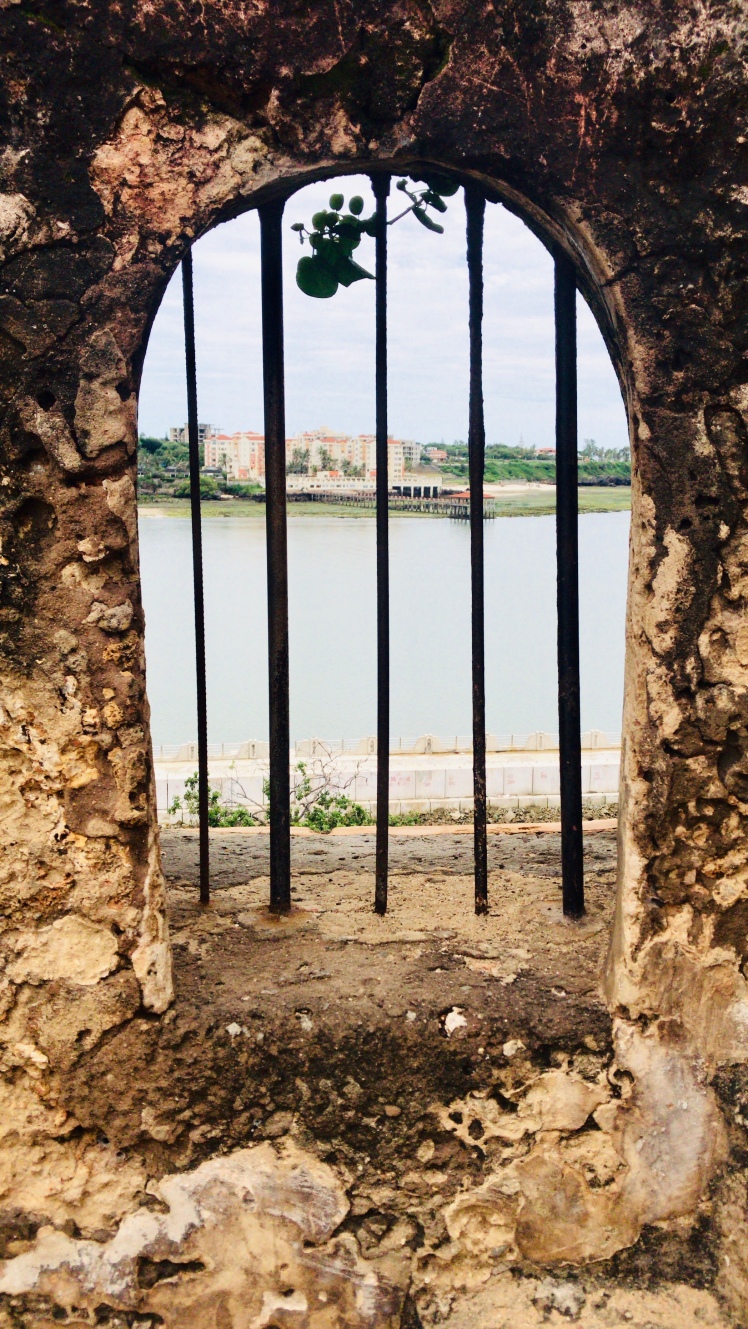 After Fort Jesus, I ventured into Mombasa’s Old Town neighborhood. There were several men trying to be my guide saying it wasn’t safe to go alone, but after the incident at Fort Jesus, I felt safer alone.

First stopping for a break at a cute cafe for a mango smoothie. 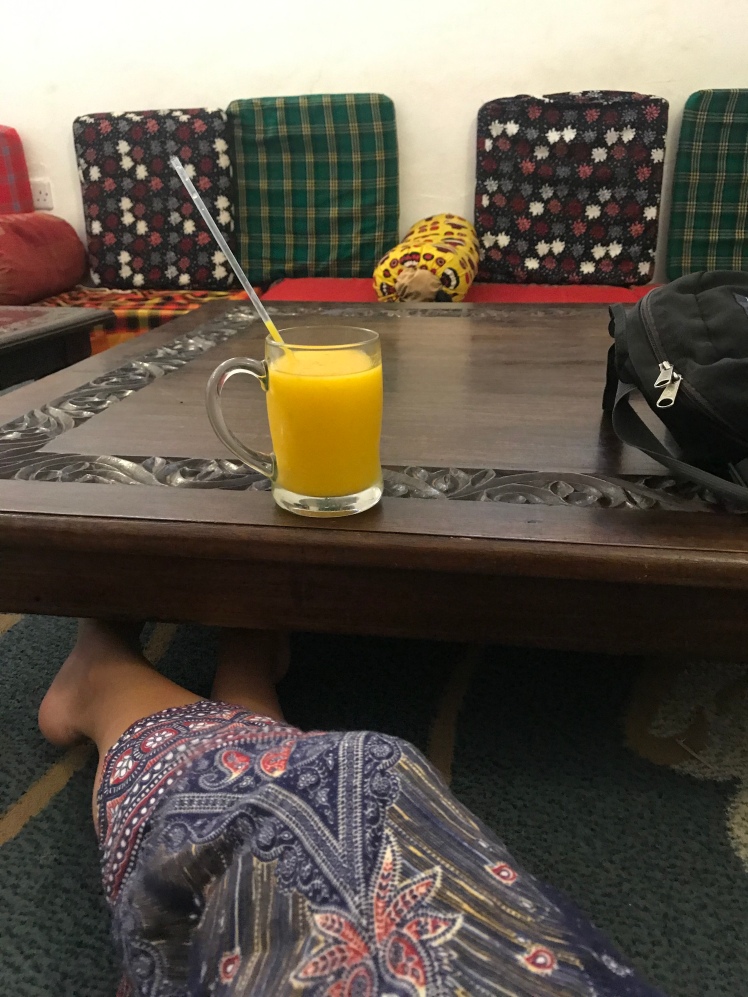 Old Town is a truly unique place. There are Swahili and Arab influences in the architecture and dirt streets, and the entire neighborhood was very Muslim. I really enjoyed getting lost in the ally-ways and staring up into the buildings. 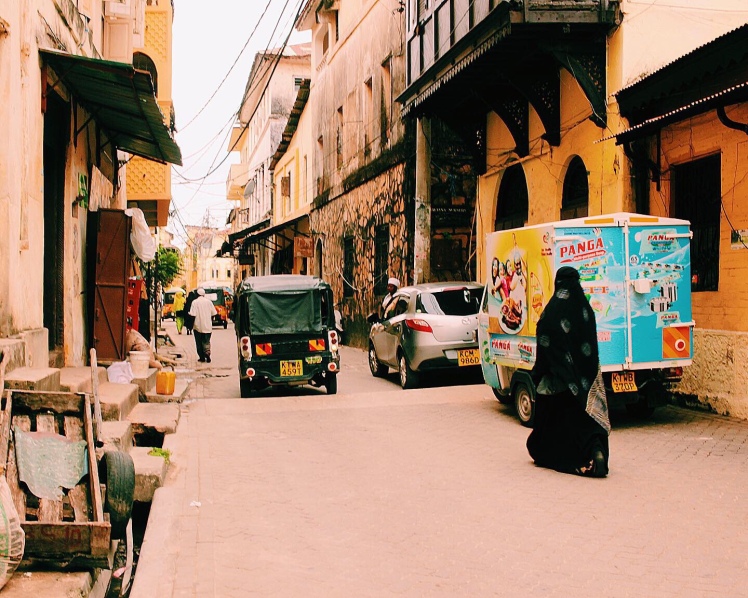 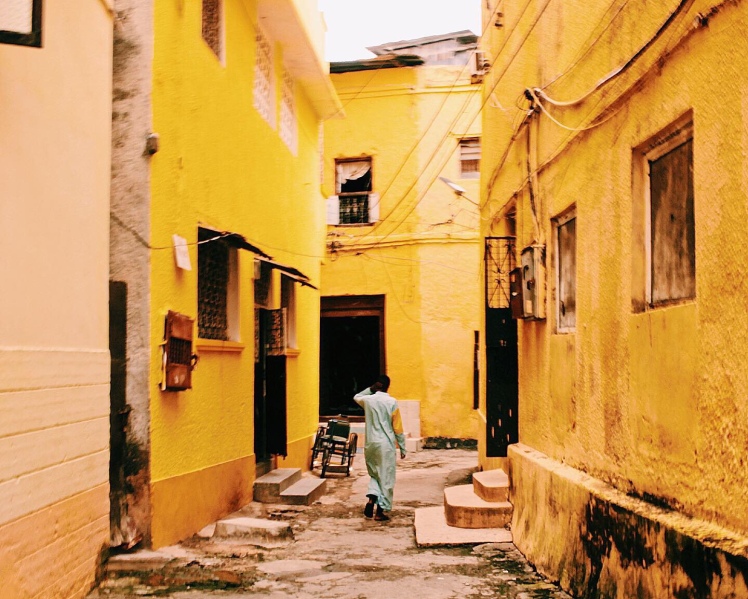 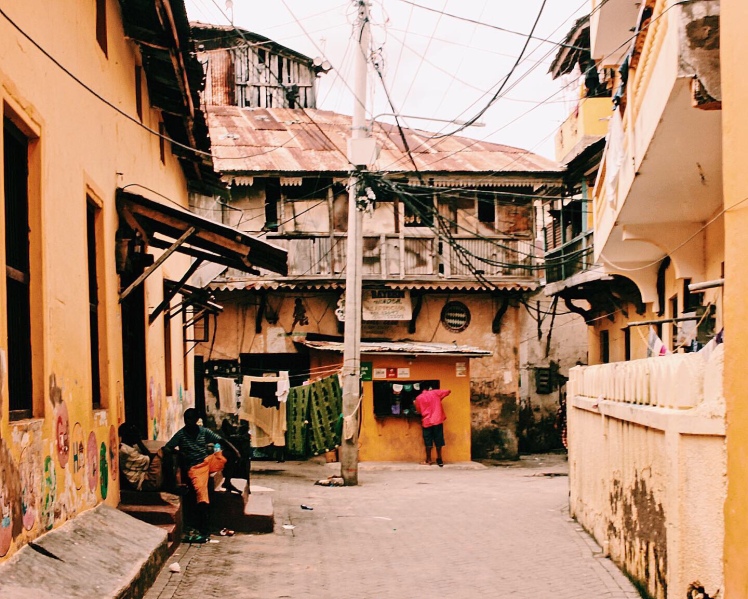 I definitely stuck out like a sore thumb being alone as a female and not fully covered; there were also literally no tourists around…(I’ve found that tourists in Kenya tend to stay in their quieter hotel neighborhoods), but locals were very friendly and almost every person/child came up to me to say hi. Like the beach yesterday I really just wanted to explore in peace, but this time I knew I was in their residential neighborhood with no tourists around, and I so I was gracious for their hospitality and talked with each and every person.

Afterwards, I went to a local market where they sold spices, fruits, clothing and more. It was madness.

On my way back to the hostel, I passed by this lady who was braiding hair. I always wanted to have a braid with beads and she did one for me. 🙂

Lunch at my hostel. Kenya actually has great Indian food and these samosas were to die for.

The rest of the afternoon, I decided to hit up the beach again. This time it was much less crowded and I could actually enjoy a swim. I also got a massage from the same lady as yesterday – she was the best. 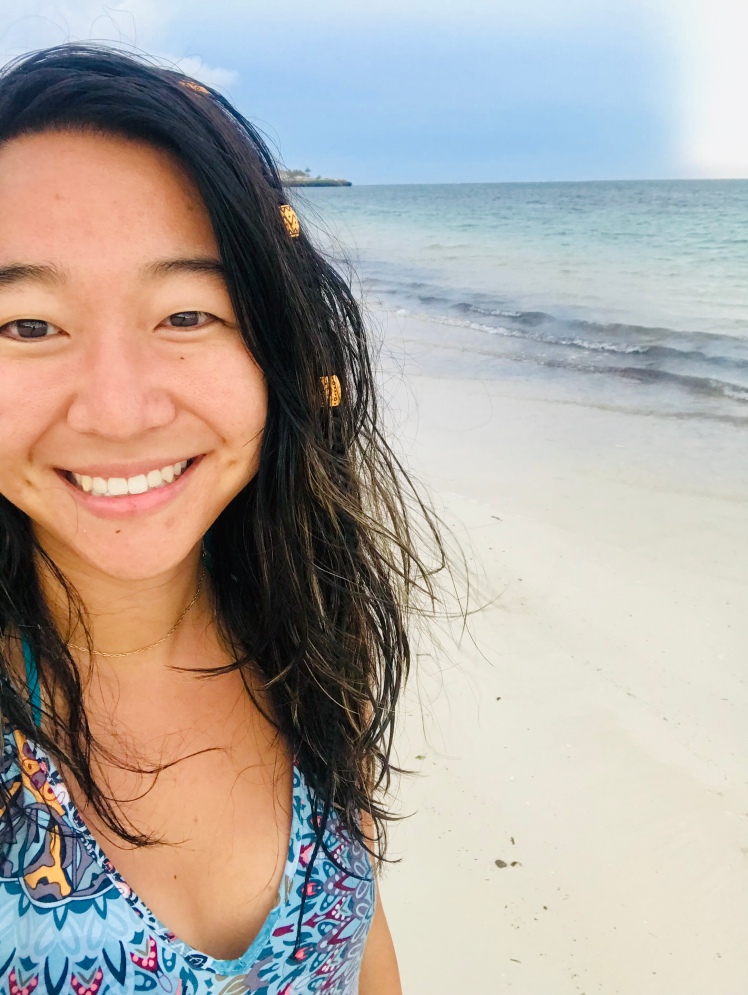 The rest of the evening I hung out at the hostel with the same people as yesterday and called it an early night.

My last full day in Mombasa was a relaxing one. I didn’t have any plans and decided to make it a lazy beach day.

The morning included breakfast at a coffee shop and working on this blog post. 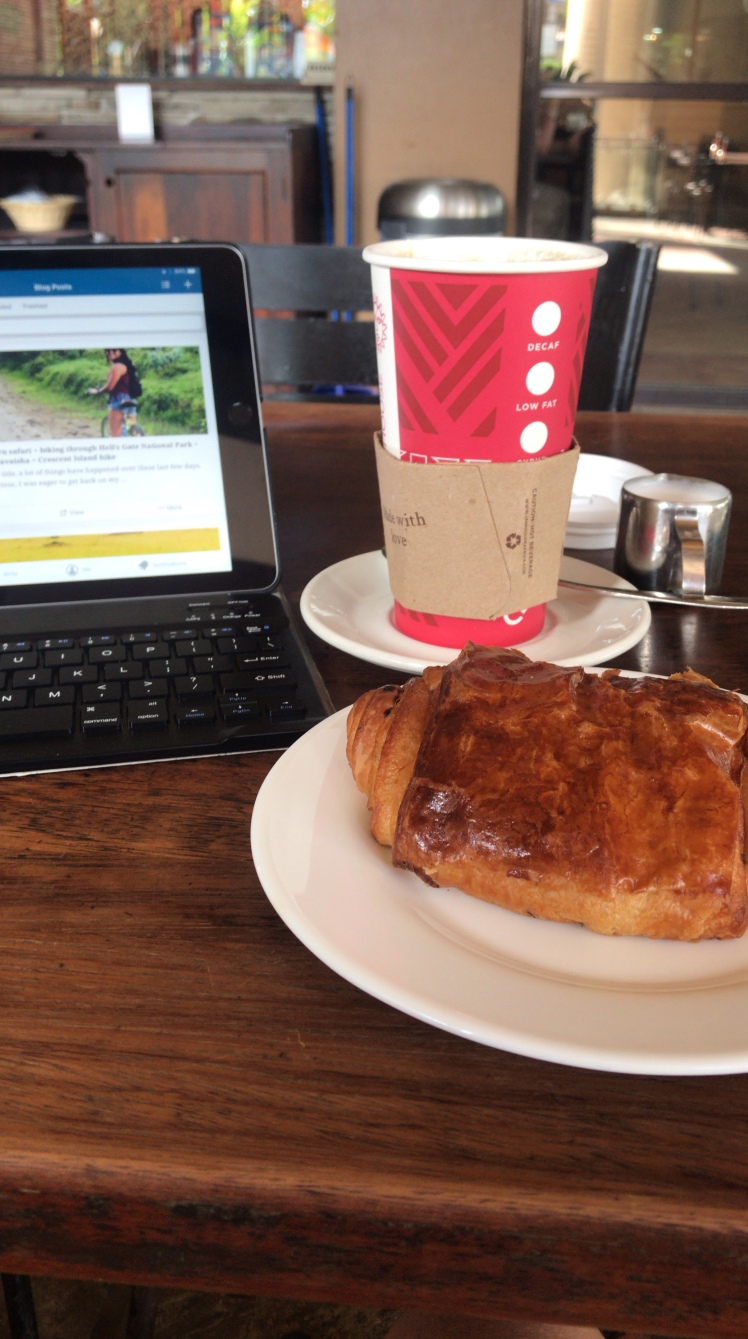 Then I took a short tuk tuk ride to Jomo Kenyatta beach, which was a bigger and nicer than the beach near the hostel. I paid a little extra to have some privacy at a hotel, enjoying my pizza, my book, and swimming in the ocean for the entire afternoon. Despite being at a private hotel, there were still men watching me over the barrier for hours waiting for me to get up and swim to hit on me.

I tried to not let the harassing take up too much headspace. It really was a beautiful beach.

The rest of the night, I made some new girlfriends at the hostel and we hung out over a bottle of wine. I was able to vent about my struggles the past few days, and they definitely helped me feel validated as we all shared similar frustrations traveling as females in Africa.

Overall, I’m happy to make it to the coast since I really love the tropical beach-y vibes and the richness in culture, but I also have mixed feelings towards how difficult it’s been to stay safe and sane as a solo female traveler. I remember at one point being consumed with anger because I felt like this trip would have been SO much easier if I were a man, and not have to worry about things like creepy men feeling me up while I’m sleeping…

It so goes against my nature to be rude and ignore people but it’s just what you have to do here. As much as I want to make connections with locals, the few times I thought I could trust a guy and treated him like a friend always led to that person eventually crossing the line physically.

If you’ve made it this far, I appreciate you for allowing me share. Blogging has always been a great outlet for me to process, and I’m more than ready to file this chapter away and move onto the next and final stop of this trip. 🙂

Goodbye virgo season
A simple and beautiful past few weeks. Grateful for my fam, my hometown, my new dog nephew, and east coast summers.
A few months ago, we had the idea to live in Mexico and take advantage of remote work, and we decided to go for it. Between the ups and downs of travel, exciting and mundane moment of daily life, it was one of the best things I’ve ever done.
From another point of view
Loading Comments...
%d bloggers like this: