Happy last week of June! (How is it already?!)

Things really couldn’t get better this week after I found out I got my first actuarial designation so I was riding that high all week. I have a jam-packed weekend to cover this post followed by some training talk, so let’s get into it:

Friday: Sunset picnic + Off the Grid

After work on Friday, Whitney and I wanted to enjoy the warmth and long daylight, and so we grabbed two bottles of wine we bought at the winery we visited in Colfax last weekend, plopped down at Fort Mason lawn, and we wined away. There had been a lot on both of our minds from the week and it was SO refreshing to talk through everything, piece by piece with no filter, all while watching the sunset. 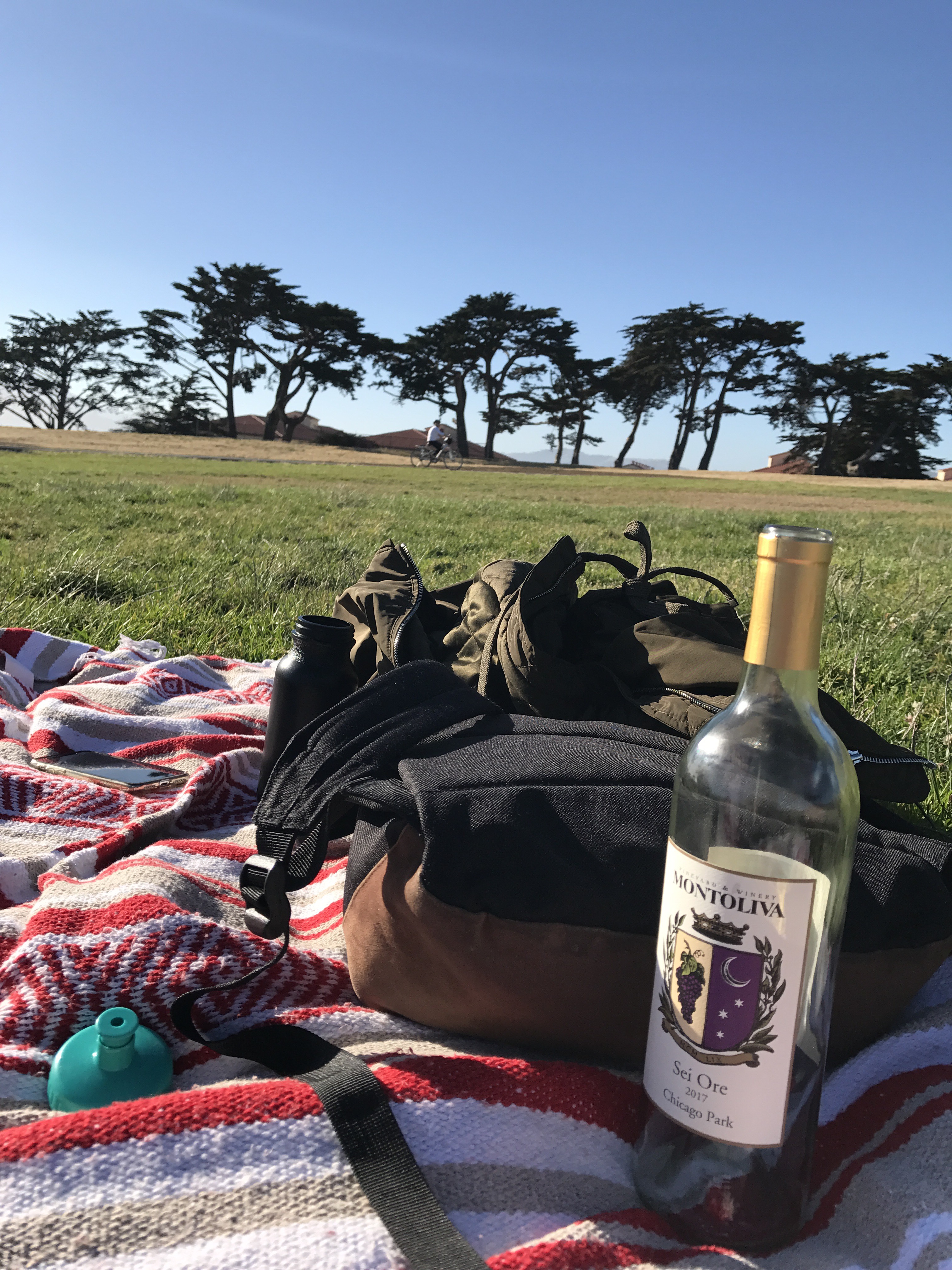 Afterwards, we walked a few short steps to the Off the Grid foodtruck picnic at Fort Mason for dinner. We weren’t even trying to be inconspicuous with our open wine containers 😛

After some delicious BBQ in our stomachs, the evening ended with chilling at my apartment watching Queer Eye. I just started this show this week and am completely hooked! If you love reality makeover shows and are willing to cry every single episode…I highly recommend.

The downside to drinking two bottles of wine on Friday meant waking up on Saturday pretty hungover. I gave up on my long run for the weekend and met up with Rahul instead for brunch as he also went out drinking the night before. Twinning with fried chicken sandwiches = just what we both needed to start the day.

With the shades down, listening to music, Rahul and I chilled a little longer at his apartment before I was off to the Ferry Building to meet Kim and two of her friends for an afternoon in Sausalito. Even though I had just gone to Sausalito two weeks before, I was excited for a second visit since the first time was so much fun, and I knew this group would be doing more of the eating/drinking activities in the town versus the outdoorsy stuff Whitney/Ana and I did last time.

Around 5 days a year, SF sees temperatures over 70 degrees, and Saturday was one of them. That said, Sausalito was filled with people out and about and enjoying the gorgeous sunshine and views. We decided to get away from the touristy part of Sausalito and explore further into town where more of the locals lived. We found the cutest beer garden with wide open space and big patio…such a gem. The four of us ordered beers and appetizers by the breezy water.

After drinks, we stretched our legs by walking around Sausalito’s “house boats”, where people legit live in these boat-turned-houses. It was an interested sight…since half of them were the original hippie-dippie house boaters, while the other half seemed to be the rich, bougey families who purchased these as a vacation home…we talked about how that really exemplified the changing Bay Area.

In the evening, Whitney texted me asking if I wanted to tag along one of her friend’s going away party. We stopped by a small house party in the Marina, followed by grabbing a drink at our favorite outdoor bar in SF, Jones. It was so nice to sneak in some more quality time with Whit – I can’t believe she’s leaving us a in a few short weeks!

I was up and about first thing Sunday morning. This weekend was Pride all across the U.S., but SF was especially super festive as it is the birthplace of Pride. People travel in from across the world just to celebrate in SF. Sarah/Anna/Whitney and I got a spot to march in the parade with USF since Sarah works there. It had been on my SF bucket list to march in the Pride – we were all so excited!

Some glitter and makeup to get us into the mood 🙂

While we were waiting in line for march, we saw someone push around this pig. What a queen.

We just so happened to be in line next to these firemen. They were so sweet to us and let us take a picture 😉

And then the parade began! 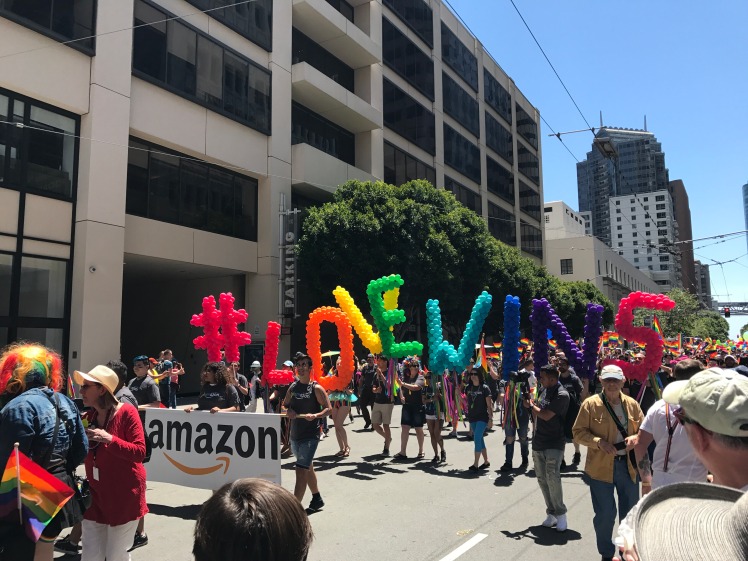 Wow…is all I can say. I didn’t have high expectations for the actual parade, but it turned out to be So. Much. Fun. The route took an hour or so to walk so we didn’t get too tired under the sun. We happened to march behind a float with huge speakers and so we were dancing away the entire time. Our group was so energetic and positive, and even more fun was the amazing crowd that came out to watch, dance, cheer, and support LGBT rights. The whole city was filled with celebrating love – it completely warmed my heart. Hands down one of the most special things I’ve done in SF so far ❤ 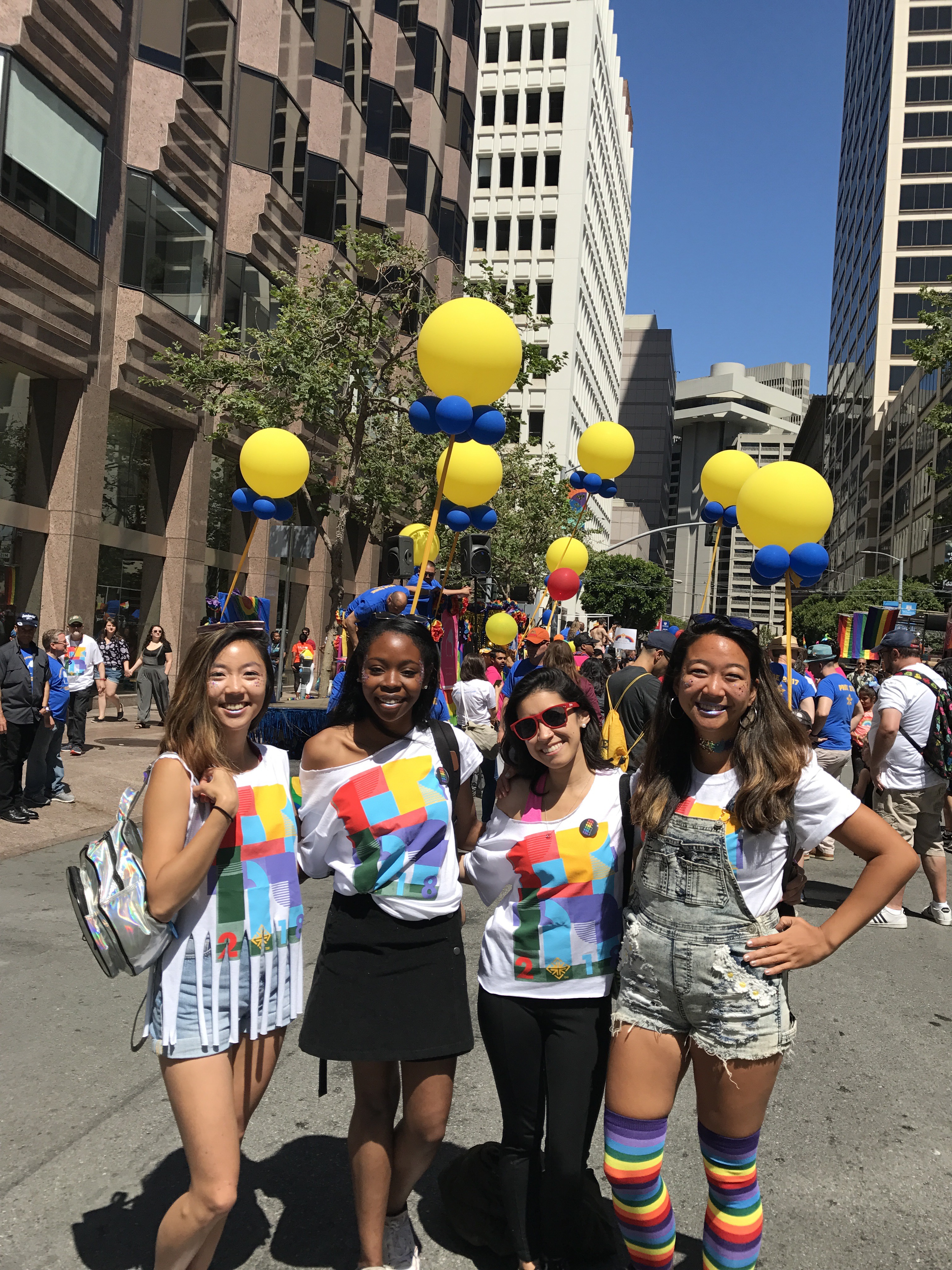 The end of the parade was city hall which was also lit up with pride. There was a huge concert going on with beer, food, dancers on the side, activities…it felt like the entire city was out there celebrating pride. 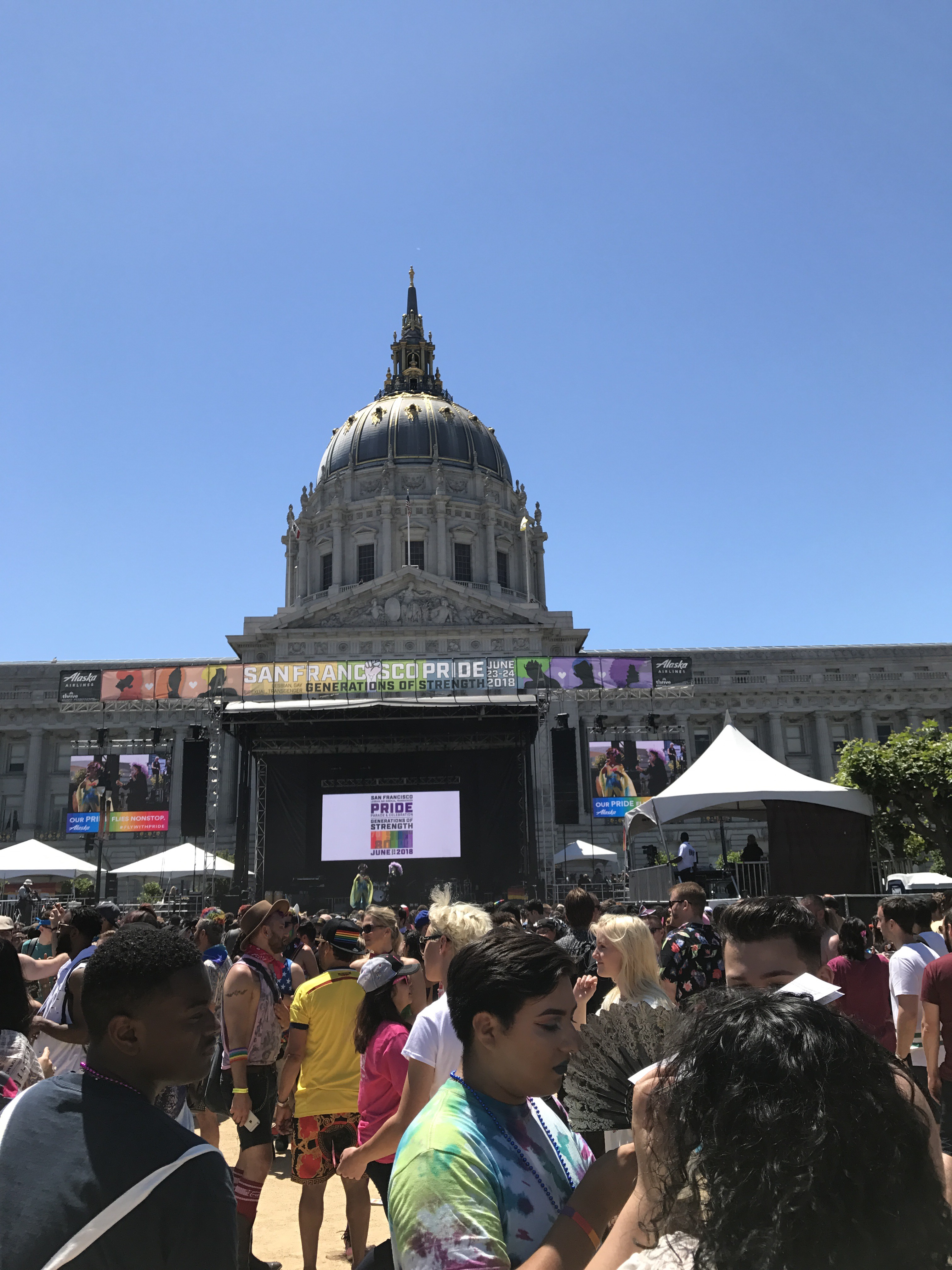 We found a spot on the gross, drank, and enjoyed the sun. So good to sit down after marching all day!

Right after pride, it was time to head up to the Marina as Anna was throwing a casual party since she won a raffle to get free appetizers at one of our group’s favorites bars. We all felt like the whole situation was pretty hilarious, but definitely took advantage of it 😉

It was so nice to see all the girls + all the guys together all in one place. It was the perfect, low-key way to wrap up a weekend packed with activities –> with all my favorite people, hanging out and just being ourselves. 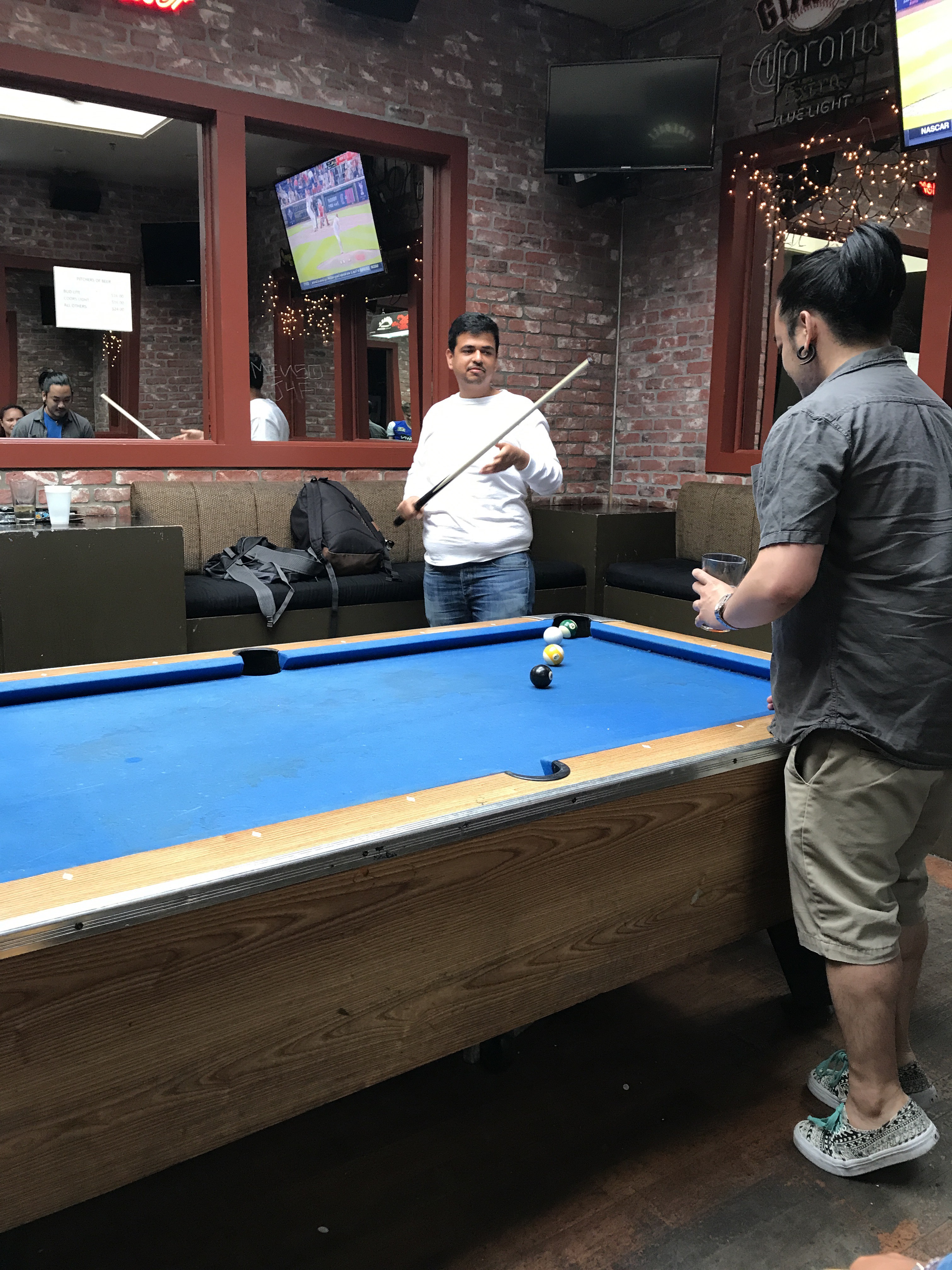 Really REALLY looking forward to this week as my best in the whole world, Michelle, flies in from NYC on Friday!!!! We’ll be starting in SF and road-tripping all the way down to San Diego via Highway 1, one of the most beautiful road trips in the world. We’ve been on the phone lots these past few weeks planning/hyping up this trip, and I can’t believe it’s almost here.

To be honest, I’m not feeling super confident about this half marathon. It’s only been three weeks of training but between missing my long run this past week, all of my travel plans in July, and just overall unhealthy feeling I’ve been having, it’s hard to picture getting to the start line in 5 short weeks. I’m still going to have this race in the back of my mind and continue logging my runs on this blog, but to be honest, my heart is more in summer mode, celebrating life after getting my designation, and wanting to cherish this precious time of year with friends. If I do run this race, I’ll probably be signing up as close to race day as possible with the way it is looking. 😉

A simple and beautiful past few weeks. Grateful for my fam, my hometown, my new dog nephew, and east coast summers.
A few months ago, we had the idea to live in Mexico and take advantage of remote work, and we decided to go for it. Between the ups and downs of travel, exciting and mundane moment of daily life, it was one of the best things I’ve ever done.
From another point of view
Nothing like a fresh coconut ya know what I mean?
Loading Comments...
%d bloggers like this: