I have exciting news to share with you all…I’m moving at the end of the month!! As you could probably tell from my past posts, I’ve been really lonely living alone in Astoria, and last week I decided to say goodbye to my current living situation, move back to Manhattan, have roommates again, and be closer to friends!

What influenced my decision was that I really haven’t felt like this neighborhood was my home these past few months, since I end up spending most of my time in Manhattan. I felt so far from my friends and was often saying no to plans simply because they were too far way. That’s when I knew I had to make a change.

I could not be more sure, excited, and terrified of this decision. This year has been incredibly up and down, filled with uprooting my life all around NYC. It was hard to admit that this was the right decision at first, since it was also admitting that I was “wrong” about my decision to live in Queens, but I realized that this is the time to be exploring new places and taking these risks to figure out what makes us happy. I’ve definitely learned so much about myself throughout these past few months, and I am beyond excited to start a new chapter closer to my people!!

Now to talk about my week:

This week was primarily filled with lots and lots of apartment hunting. Ugh, so painful. It’s definitely a bit more difficult this time since I’m also looking for cool/normal people I can see myself living with for the next few months, but at the same time there is less competition since it’s off-season, so it balances out.

I also got to catch up with one of my oldest friends, Lindsay. We’ve known each other since we were 10 years old, and remain very close to this day. She knows so much about me and it was so great to catch up. I also got to meet her current roommate, who is Canadian and definitely a ball of fun! She just has such an optimistic view on life and it was contagious.

After work on Friday, Phil, Christine and I tried a Filipino spot in east village. It was SUPER delish. I’d never tried Filipino before but it was super tasty. It sort of reminded me of Thai food but more garlicy. Phil is super great at picking food places, and I’ll definitely be going back. This was one of many food discoveries this weekend. Discovery #1.

Then, Christine, her boyfriend, Sean and I grabbed drinks in east village. A great way to end a long week of apartment hunting.

One of the highlights of my weekend was cheering on my friend Matt for the NYC Marathon! He’s one of my best and only running friends in the city, and I was so excited to be part of the experience through him. We went to the race expo together Saturday morning, and boy did it make me nostalgic. I ran the NYC Marathon last year, and for the longest time, I didn’t remember it too fondly…it was such a difficult race and I was so undertrained, and I just remember being in pain for 80% of it.

But, seeing it all again this year gave me a change in heart – it made me isolate the happy memories of the marathon – seeing the beautiful city, the energetic crowd support, loved ones coming out to support me…it’s amazing how your brain forgets the pain after enough time passes.

I so would love to run this marathon again in the future. It’s definitely one of the world’s most unique races, and I am so proud to be a veteran ❤

Later in the evening, I headed to west village to grab dinner and drinks with Trish at extra virgin, a trendy Mediterranean restaurant with amazing cocktails. It was my first time and definitely a great experience!  Discovery #2. Afterward, we headed to the Belfry in east village for some more drinks, then LES for some dancing. So, a typical night out in NYC. We were just super silly and completely ourselves, not having a care in the world about the things around us. One of the main reasons I love being with Trish ❤

Sunday morning, it was time to cheer on Matt!!! I’ve never been a spectator at a race before, but I had SOOOO much fun. I absolutely loved feeding off the crowd’s energy, cheering on as many people as possible. If you’re a runner, then you know just how important good crowd support – your mind can go to scary places without it – and I was so happy to help provide it.

I was watching right outside Phil’s apartment in LIC, so afterward we grabbed lunch at a completely new spot called Takumen. It was super amazing. The whole restaurant had a chic, down to earth, quality vibe – the menu, utensils, and even service was super unique. What a great find. Discovery #3

For dinner, I headed to east village for pizza at Motorino. SO DELISH. Apparently Rachael Ray lives in east village and orders from this place more often than she cooks herself 😛 The pizza was super fresh and light, and definitely hit home. I got the chance the catch up with Christine and also make a new friend! I’m a huge fan of Sunday dinners to help eliminate the Sunday blues and the overwhelming feeling of everything to do this week. Discover #4. 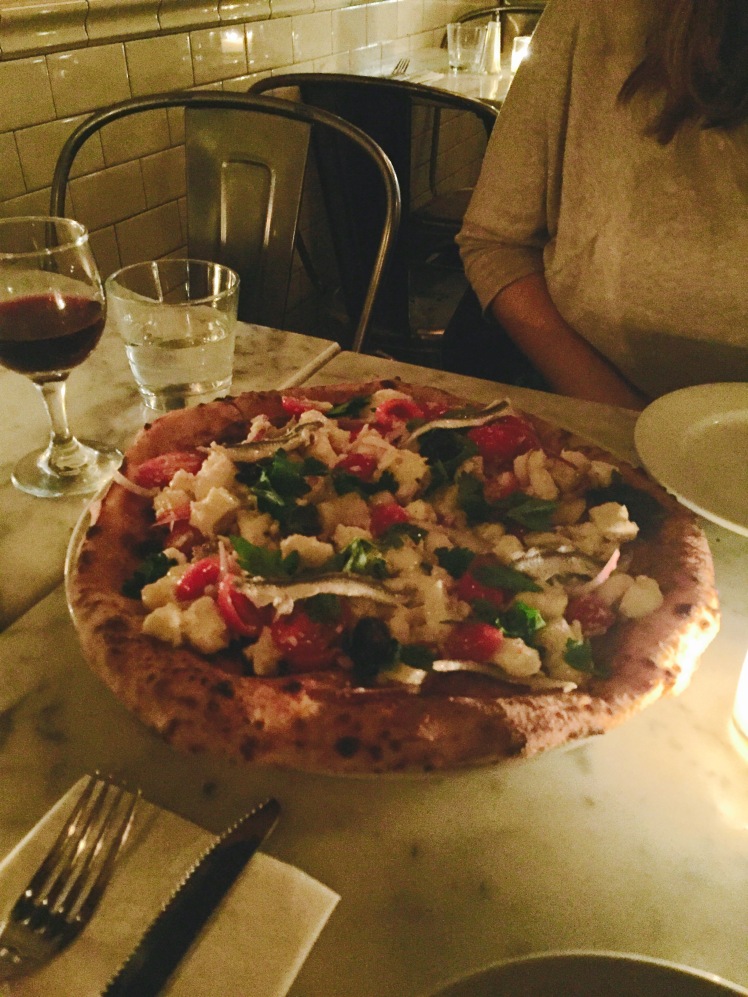