This weekend was spent in lovely Colorado with Phil and Scott! It was the perfect getaway filled with exploring Denver and Boulder, as well as the best skiing of my life. It was also an unintentional farewell trip for Scott, as he is moving to SF. Get ready for a photo dump of mostly food, scenery, and random shenanigans we came across this trip.

The guys picked me up at the airport in the evening, and we headed straight downtown. I was absolutely famished so we went straight to dinner at Kitchen, a casual New American dinner spot in downtown Denver. 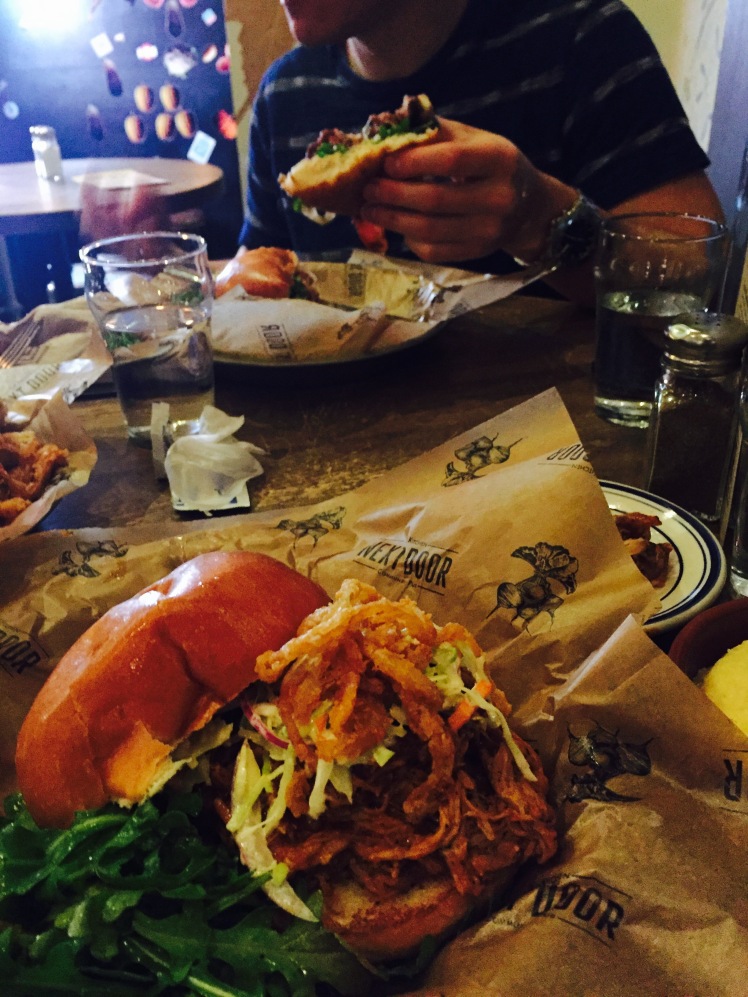 Then, we got the night tour of downtown. Scott grew up in Denver and knew all the ropes – it was SO nice to have a tour guide and not worry about anything the entire trip. 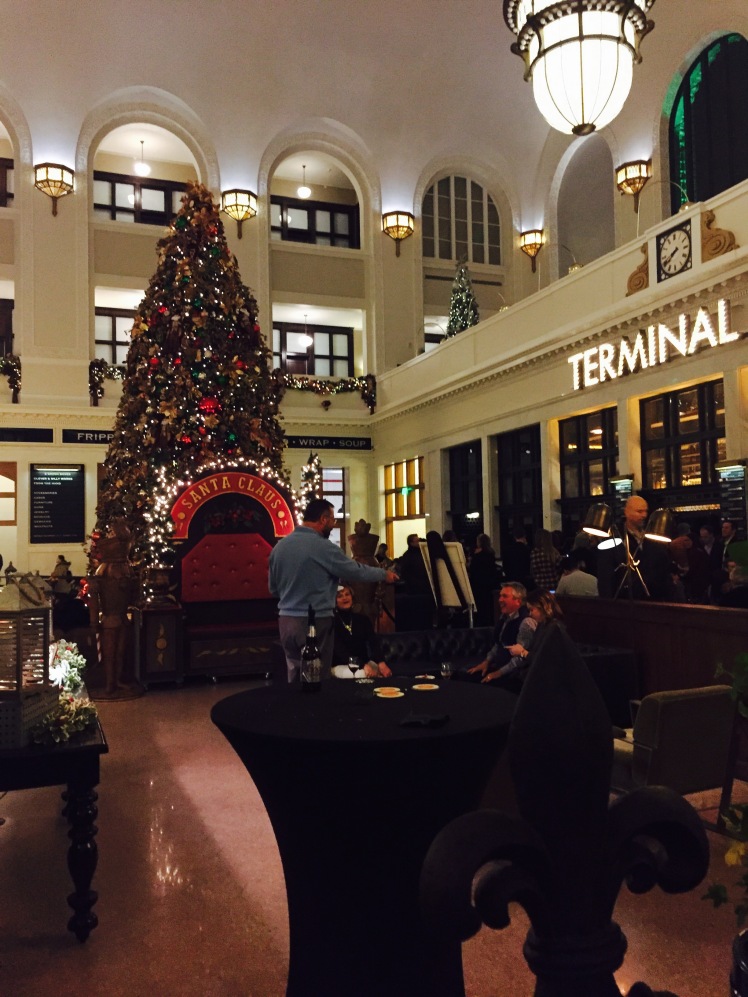 Then, we walked around a little more and saw Denver in the night. I immediately got a great vibe from the city. Everything felt so new, hip and relaxed. And everyone looked so healthy and straight out of a Patagonia ad. 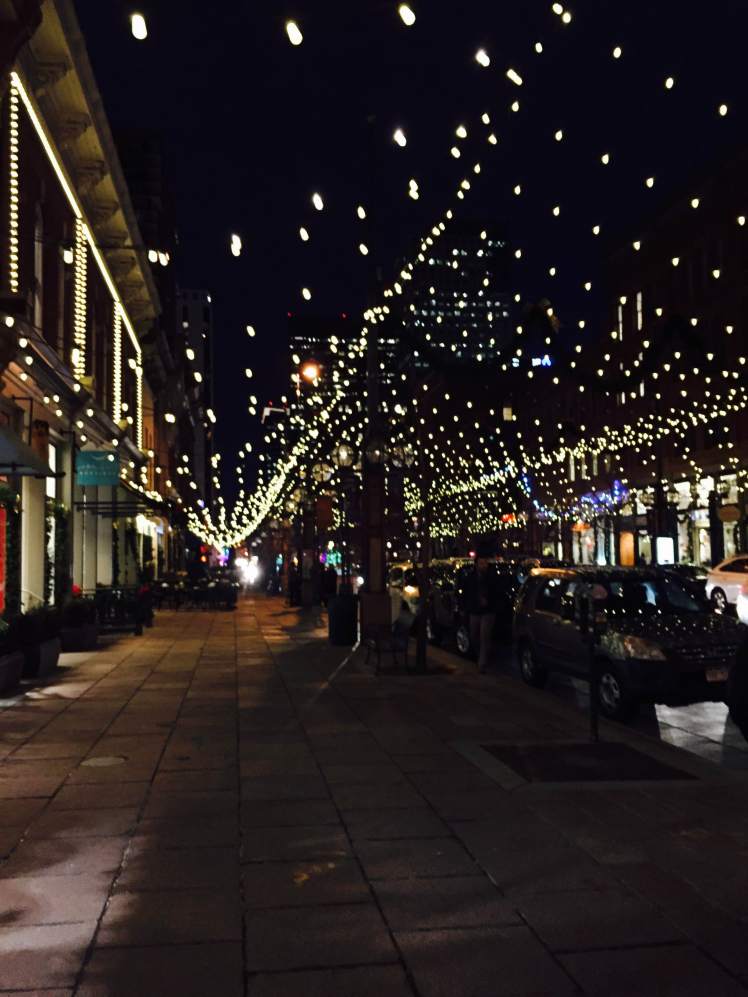 Later that night, a few of Scott’s high school friends came over and we chilled over some beer. I had met most of them before when they visited NYC before. Day 1 left me excited for a fun weekend ahead 🙂

I woke up feeling 100% – woohoo! I was so nervous about getting elevation sickness, but looks like building that VO2 Max through running came in handy 😉

Most of the day was spent driving around and seeing Colorado in day light. I LOVE roadtrips so didn’t mind some quality time in the Mercedes 🙂 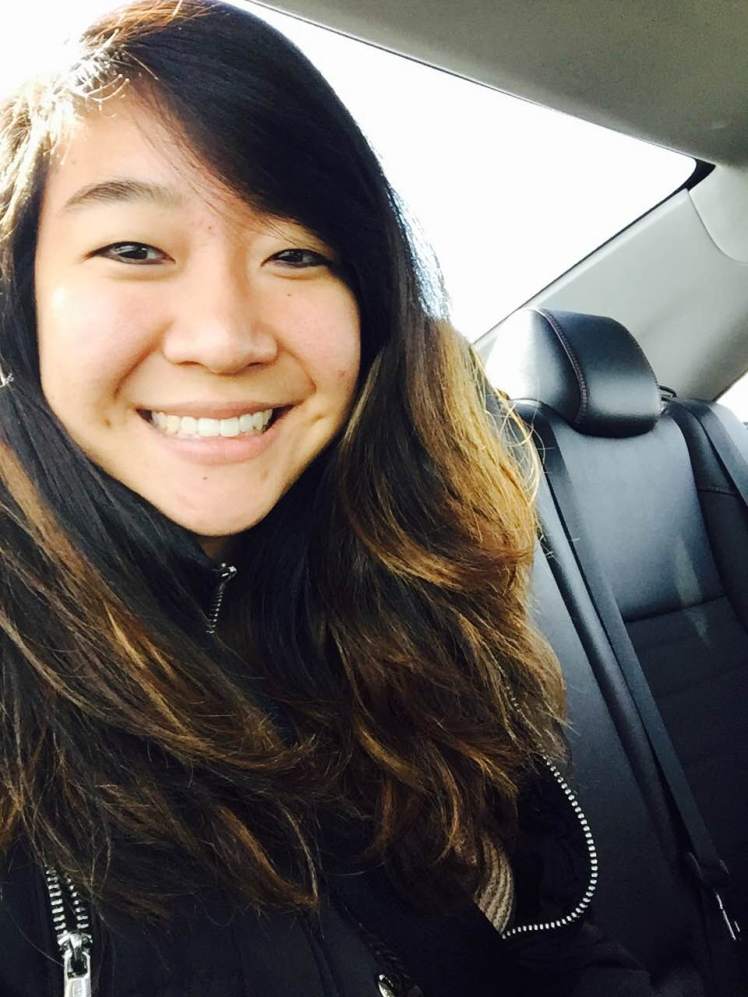 Those views from the car… 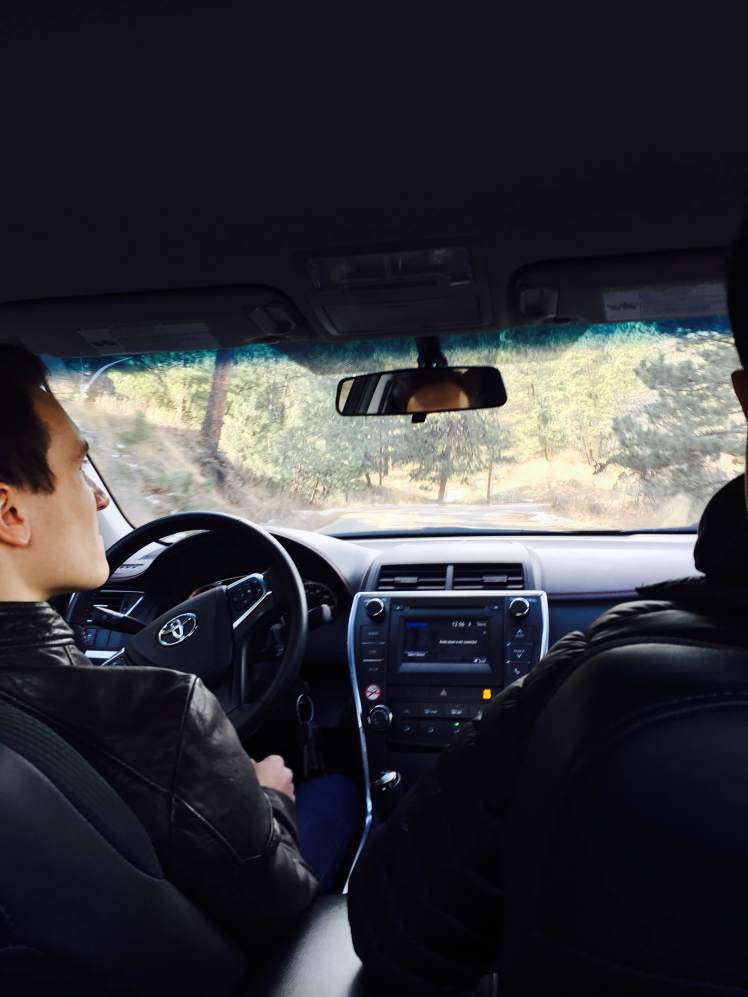 We headed to Boulder, first driving through University of Colorado. Boy did it get me nostalgic of college, seeing all the hippie college kids walking to class with not a care in the world.

We stopped by a hip sushi spot for sushi bowls lunch. I must say, the food on this trip was close to being the best part.

Then, Scottie took us up Flagstaff Mountain, a super cool mountain with tons of hiking trails and bike paths. We were feeling lazy and cold, and opted to take the scenic driving path. 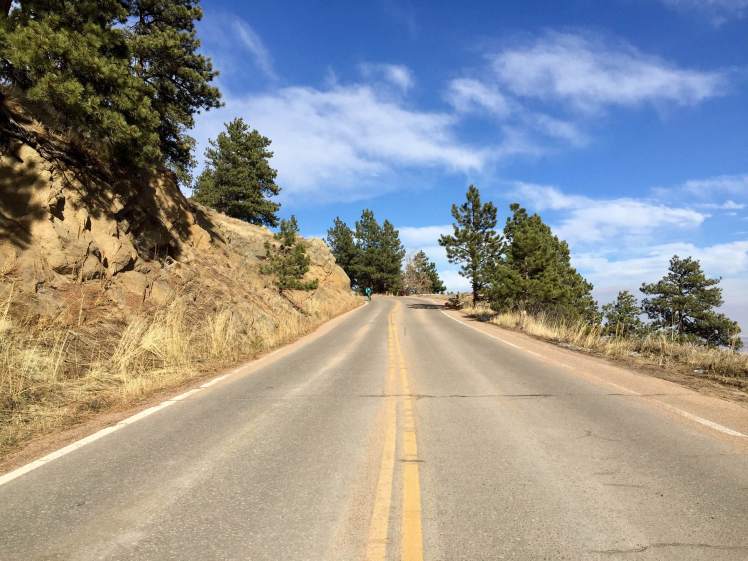 Pulled over for to enjoy the views. 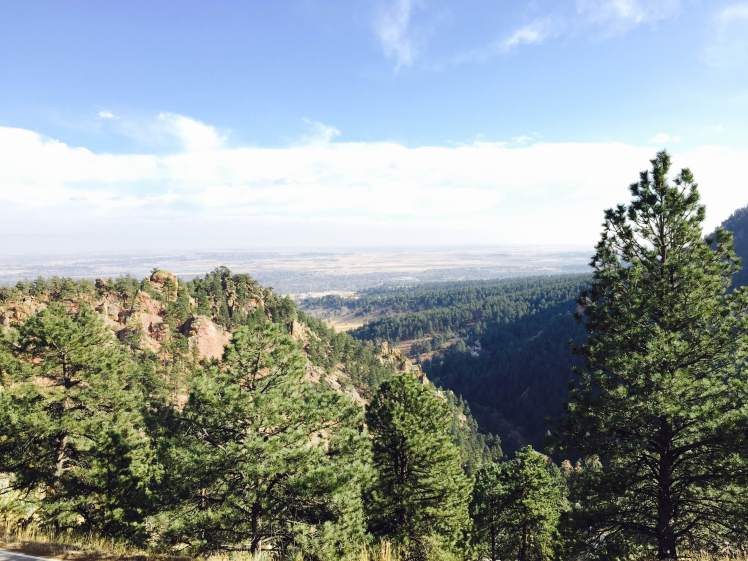 After getting a solid helping of Boulder, we went back to downtown Denver. It’s definitely a different scene during the day – I loved every bit of it.

Some shopping and a coffee break on 16th street 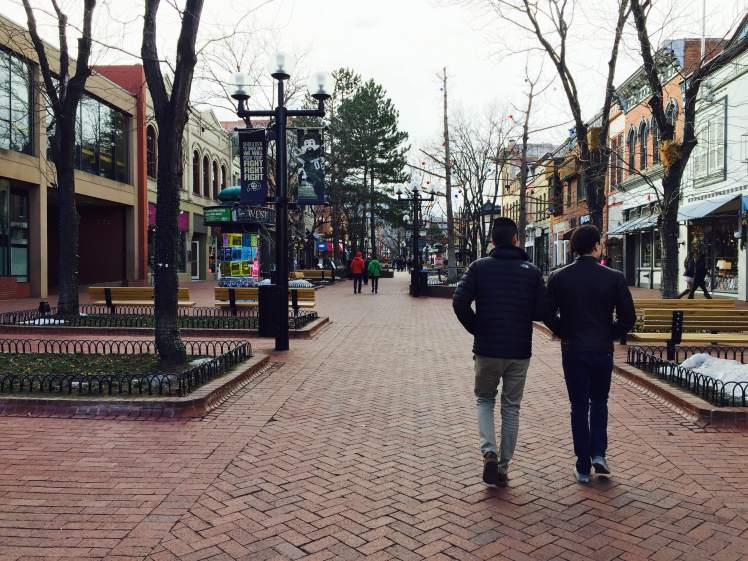 I loved this local artist shop. It reminded me of a artisan store in Iceland <3. I wanted to buy everything!

Stopped for happy hour ;). The boys playing with the new camera (they both bought the same mirror-less model)

After a long day of car riding and walking, we were super beat! The evening was spent having dinner with Scott’s dad, and watching netflix.

We slept in and spent the morning chilling at the house. It definitely reminded me of high school, having so much house space and watching tv in the basement. Such a different world from living in NYC. The weather outside was in the single digits…so we decided to try and pick indoor activities for the day.

Our first stop for the day was lunch at a yummy pita place that served Chipotle-style. I loaded my gyro with everything possible.

Then, we headed to the city of Golden to take a tour of Coors brewery! I was so pumped. I love brewery tours and learning about different types of beer. 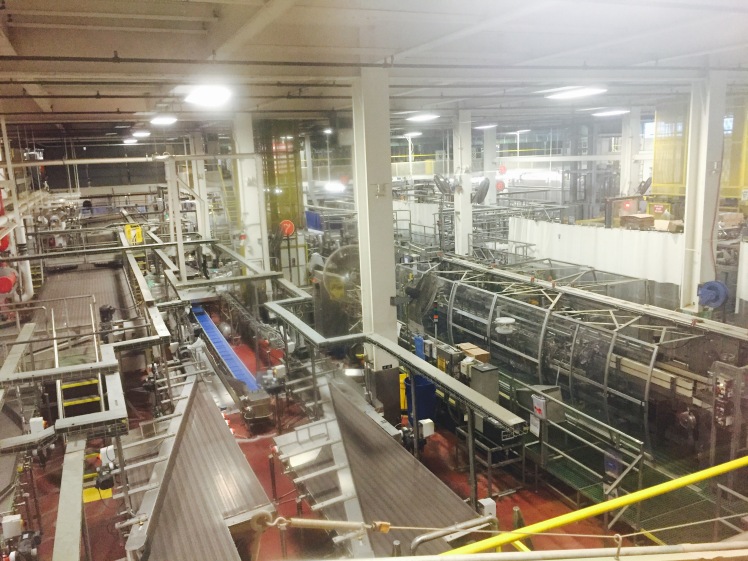 Best part – beer sampling at the end! I had no idea Coors owned tons of different brands like Blue Moon.

After the tour, we were craving sweets so we stopped by a yummy icecream stop downtown. This sundae hit the spot 🙂

After a day of fun, it was time to run errands and get ready for our ski trip. We first stopped by the ski store to pick up rental skis for me and Phil, and also buy some accessories that we forgot to pack – who knew that the temperature would be in the negatives and I would need a ski mask?? Thank god Scott is very experienced and knew what to recommend.

We also stopped by Target to buy some goodies for our road trip. One thing I noticed, the stores in Denver are HUMONGOUS! This was the largest Target I’d ever seen!

Afterwards, we had dinner with Scott’s mom and boyfriend at an Indian spot. It was such a lovely time. Both of Scott’s parents are super nice, giving, and open people, and I’m so glad we got some quality time with them!!

Around 8pm, it was time to hit the road and drive up to the moutains (approx 2 hours). This was one of my favorite parts of the trip: blasting music, star gazing, chatting and driving through the night…our crew have done so many night road trips together (since we would usually leave together after work), and the entire ride just hit my happy spot. It made me a bit emotional since I knew this would be one of the last times we’d be together and do this type of thing since Scott is leaving. 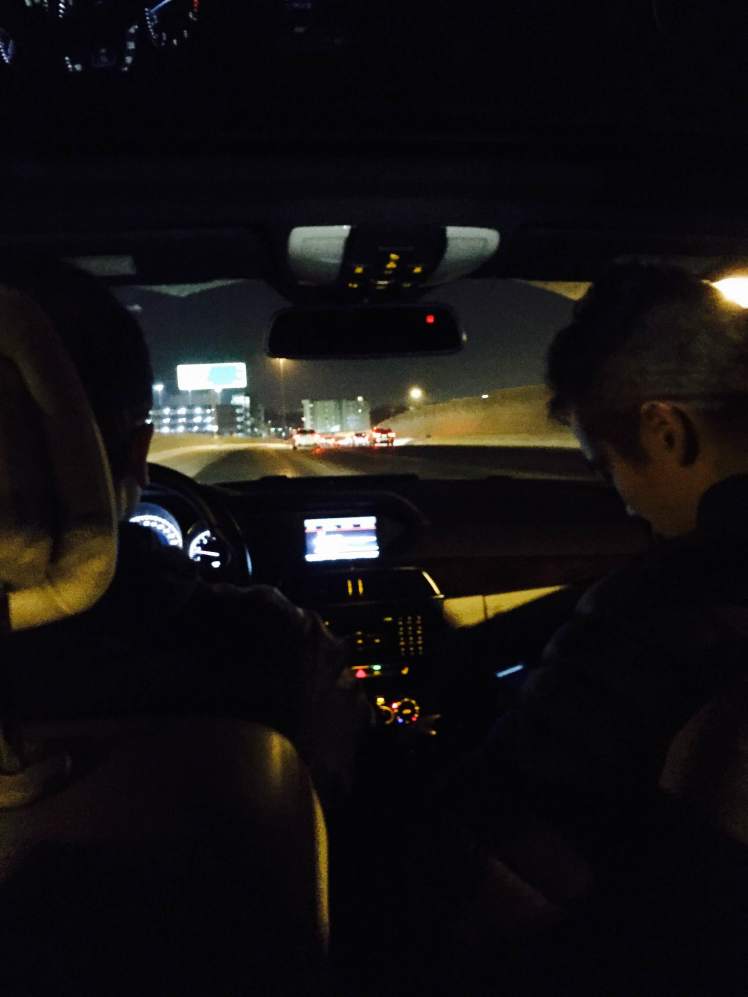 The next two days were spent on the mountains skiing. Absolutely the best skiing of my life. I don’t know how I’ll ever hit the east coast slopes again. Everything was so open and not crowded, and the views could not be beat.

Our hotel was 30 minutes from the slopes. The drive in the morning was such a treat – those views!! 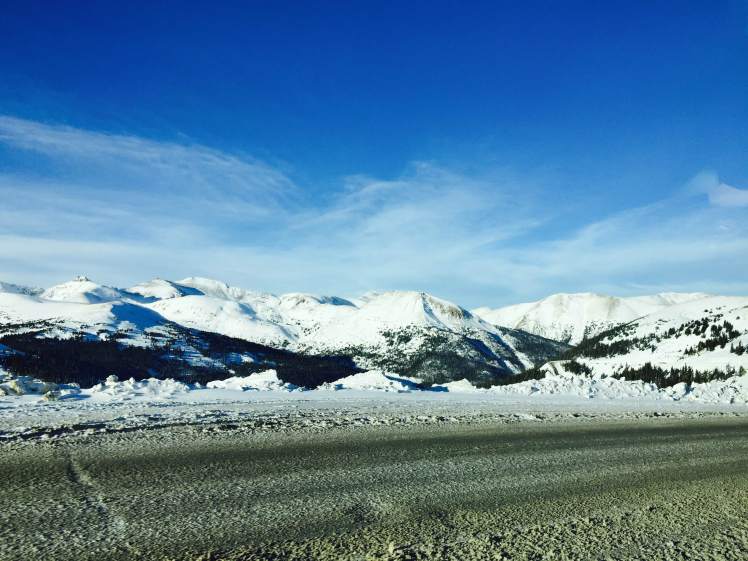 The mountain started at around 9,000 ft, and the peak was 11,000 ft. Amazing. I loved that each trail took 15-20 mins to get down, unlike east coast slopes which go down in a flash. The trails here were challenging but doable, and I worked on perfecting my parallel skiing and ditching the “pizza” method :p

Riding on the gondola. I may have spoke too soon about championing the elevation. As we were riding the lifts, I was definitely feeling the elevation and felt minorly nauseous. I also felt pretty winded going down the mountains from lack of oxygen. Good thing we had a few days in town to adjust. 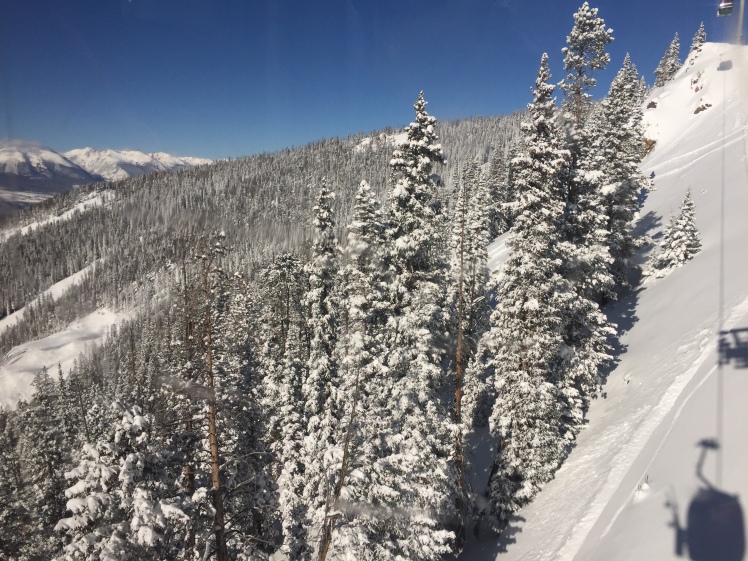 I was comfortable on the greens and blues, which really surprised me! I thought for sure I’d just be staying on the greens, but now that I’ve conquered west coast blues, I think I might go for some blacks out here on the east coast 😉

One small PSA…always ALWAYS wear a helmet!!! I use to never opt for helmets since I found them bulky and unstylish, but this time I wore it merely for warmth. I am SO glad I had one on, because at one point I took a very bad fall and slammed my head into the ice. If I didn’t have a helmet, I may not be alive right now…I felt so blessed to have the guys by my side to calm my hyperventilating, and felt even more blessed to have that darn helmet to protect me!!!

Even though Scott is sitting in this photo, he is actually SO good at skiing. He was even competitive in college. He urged me and Phil to do some moguls, which we bravely fell our way down, ha! 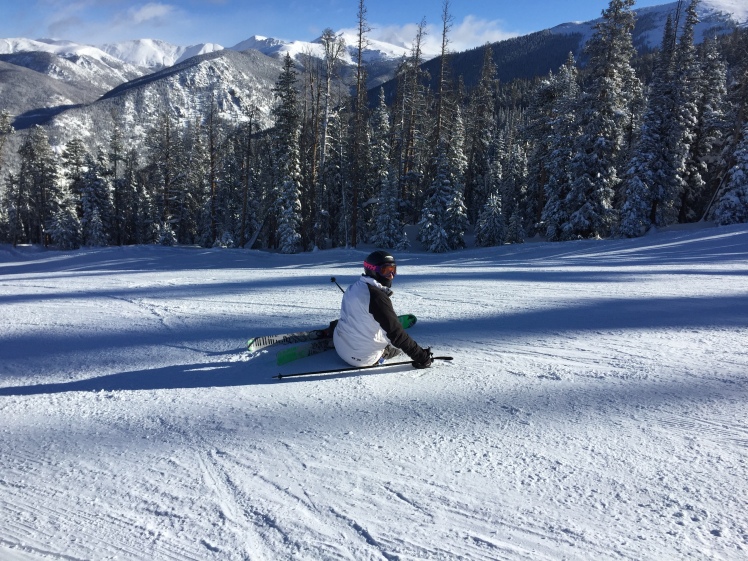 The nights were super relaxing, filled with yummy food and chilling in front of the tv. I’m so glad we got a ton of rest time this trip, especially after long times of walking/skiing.

Nothing maj to report on this day, since I had an early flight. Scott was nice enough to drop me off at the airport, and we had some great talks along the way. It was definitely a sad goodbye!

I’m so glad to have had this weekend, to get away from life for a bit, see some beautiful scenery, explore a new part of the U.S., and sharing it al with Phil and Scott. I’ll be cherishing these memories for a while ❤