This was hands down one of the funnest races I’ve ever done! I don’t have my official time yet, but I came in around 4 hours. It’s crazy that this race took almost as long as a marathon, but I definitely felt easier on my body (not to say it wasn’t still super painful!).

Saturday morning was filled with packing and racking my brain for every possible detail of the race, making sure not to forget ANYTHING. Man, did this race make me feel #broke.

I was so lucky to have Michelle come over in the afternoon to hang out with me and help prep for the race! We enjoyed some froyo, girl talk, a walk in the neighborhood, and ramen for dinner.

Then, I was on my way to Tribeca to sleep over at Nicky’s apartment! She lives right next to the Path train, making my morning commute to the start line 30 minutes instead of 2 hrs…um, YES PLEASE. I stopped by a friend’s housewarming at night and didn’t make it to bed until 12:30pm, but that was okay since I never get any sleep before races anyways.

The alarm clock went off at 4:45am. I ate some plain oatmeal, drank a cup of coffee, hopped in my race outfit and headed out. The ride there was very easy – good thing about NYC races is that there’s always people to follow – just spot the other crazies wearing workout clothes at 5 in the morning 😉

The view from Jersey City 🙂 I don’t remember the last time I was up early enough to enjoy the sunrise.

The transition area was a good amount of space. I prepped my area, laying everything out so it would be easily accessible during transitions. I had lots of time to spare to use the port-a-potty (twice!) and hang out by the race start.

The race started with a dock start – I joined the women’s olympic wave and hopped into the Hudson, slowly made my way to the first buoy…and then we started!! I am so so SOO glad I did the Coney Island open water race a few weeks back because it made the swim portion go super smoothly. The Hudson was nothing compared to the Atlantic Ocean – super calm although a bit more icky; I had no problem spotting the buoys and swimming straight. We did two .5 mile loops to make the 1 mile swim – I came out in front, feeling strong and well-paced.

Very solid transition. I opted to not wear a wet suit, so it was just matter of drying off, getting on my sneakers, reapplying sunscreen…then I was off!

The olympic bike course was 5 loops…FIVE. LOOPS. ugh. I absolutely HATE loops. After two sets it was apparent my bike was not in race shape. I was getting my butt whipped during this portion!! I put in a good 80% effort but getting passed by so many people who made it seem effortless (not trying to make excuses, but I really do think my Craigslist bikey was not up for this race). If I were to do it all over, I would definitely invest in a better road bike because this portion knocked my place as well as my energy way down.

Also I experienced chest and lower back pains starting from the 3rd loop. I think this had to do with the bike frame being too big (I was noticing some pain in my training rides and never thought to address it)…the last two loops were definitely a struggle.

The course itself was pretty flat minus one super long hill at the turnaround point. A decent number of potholes and traffic too (the path wasn’t blocked off from cars!).

Thank god for no flats!!

I was so happy/relieved to get off the bike. I expected this transition to be super quick, but I actually took a few more moments to hydrate/fuel (I brought a few gus along) and stretch out my legs. Biking for 2.5 hours straight definitely took a toll!

It was the weirdest sensation starting the run. I honestly felt like I forgot how to run! My legs were so use to the pedal motion that it took me a good 1 mile to feel comfortable in my running form and get rid the chest pains again (thank goodness).

The run overall, SUPER TOUGH. It definitely took a lot of mental strength to get through it. It was less painful than a marathon for sure simply because there wasn’t nearly as much muscle soreness as running 26.2 miles, but boy did it remind me of those last 6 miles of a marathon as far as mental toughness went. (Especially because we weren’t allowed to have headphones! Lots of thoughts go through your mind when you’re alone for 4 hours straight).

The run was two 3-mile loops. I was so happy to see Michelle cheer me on! ❤ She was so sweet and even made me a sign (my first ever!). I felt beyond blessed to have my best friend trek all the way to NJ to support me.

What I didn’t love about the run portion for this race in particular was the lack of volunteers and water stations. We were basically out on the course completely alone – I even had to backtrack a few hundred feet at one point to ask for directions. Also, it was SUPER hot by this time of day, and with only one water station at the finish line, I definitely felt the effects of the heat. After 3 miles, I stopped sweating and definitely hit a mini-wall. Thank god I had a gu on me or I don’t know how I would have finished.

However, what I loved about the run portion was that the other athletes were beyond supportive. Everyone was struggling, and anytime I passed by someone, we would give each other words of encouragement. I never saw that kind of comradery in any other race before! 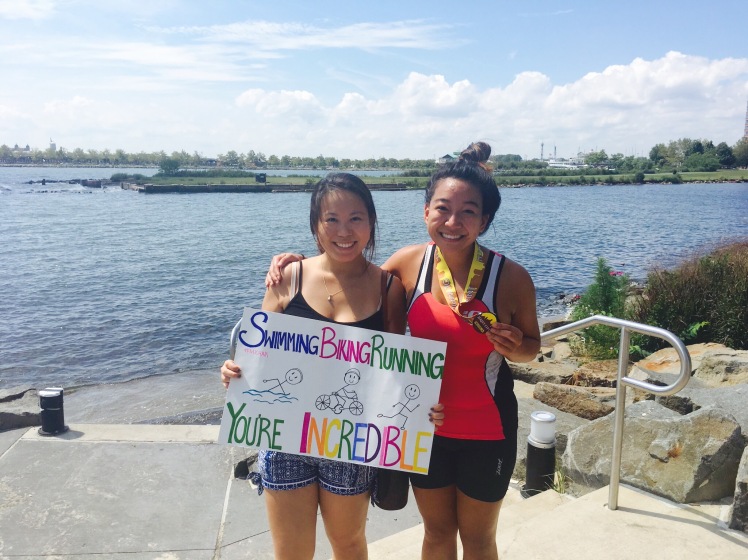 Overall, a fantastic race!! I really love the spirit of the triathlon. I remember thinking during the run that I was NEVER going to do this again…all to find myself researching fall races later that evening 😉

So happy to officially be an olympic triathlete!!

Goodbye virgo season
A simple and beautiful past few weeks. Grateful for my fam, my hometown, my new dog nephew, and east coast summers.
A few months ago, we had the idea to live in Mexico and take advantage of remote work, and we decided to go for it. Between the ups and downs of travel, exciting and mundane moment of daily life, it was one of the best things I’ve ever done.
From another point of view
Loading Comments...
%d bloggers like this: