After deciding to stay in Koh Tao until the end of my trip, I had some logistics to take care of in the morning, mainly finding a place to stay for the next few nights. I walked up and down the streets of Koh Tao with my backpack stopping from hostel to hostel – it took 3 tries but I ended up finding a bed at BP hostel. Despite being a mega-planner, the whole search surprisingly didn’t stress me out at all; most other backpackers I’ve met on this trip have also been booking night-to-night since it’s super easy to find places to stay in Thailand. The whole thing just felt part of the adventure 🙂

At my new hostel, I met a nice girl from Germany who was also on her own – we clicked instantly and decided to have a lazy morning at Sairee Beach together. My first beach day of this trip 🙂

It was such a relaxing day as we shared stories about out trip, talked about our lives at home, swam in the ocean, grabbed lunch with another friend she had met in Bangkok…then in the afternoon the two girls went off to start day 1 of their open water dive course – a short hangout with these new friends but a very sweet one ❤

After the girls left, I had some time alone. I walked up and down Sairee Beach and enjoyed yet another BEAUTIFUL sunset. They really did not get old. My favorite part was sitting at an outdoor beach bar (Sairee beach is filled with them) and listening to their music while watching the sun go down. This bar was playing chill techno beats and “Inki” by Modd caught my ear. On each trip I take, I usually discover a song that completely captures the spirit of the trip. The song so perfectly fit the sunset and my uplifted mood – I knew this was my Thailand song ❤

Later on, I went to dinner by myself. I was sitting next to a guy who was also eating alone, and I reached out to see if he wanted to join forces, and we did! His name was Mattieu from Belgium. He was so incredibly friendly and another solo backpacker. I thought it was ironic that he said he was at the end of his year-long trip with “only” 5 weeks left…that’s longer than my entire trip! Amazing how traveling really changes people’s perspectives of time 😛

Afterwards, Mattieu and I went a beach bar, and Maik also joined us! The three of us had a blast chatting away, listening to the music, sharing drinks, and even partaking in the fire limbo ;). A solid night in the books. 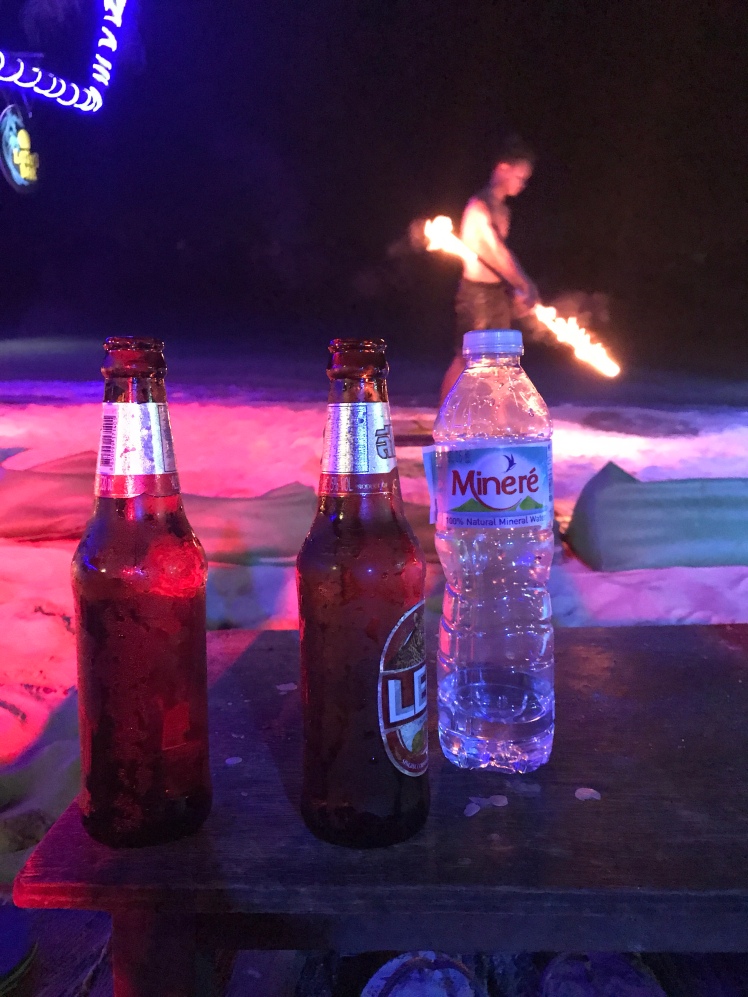 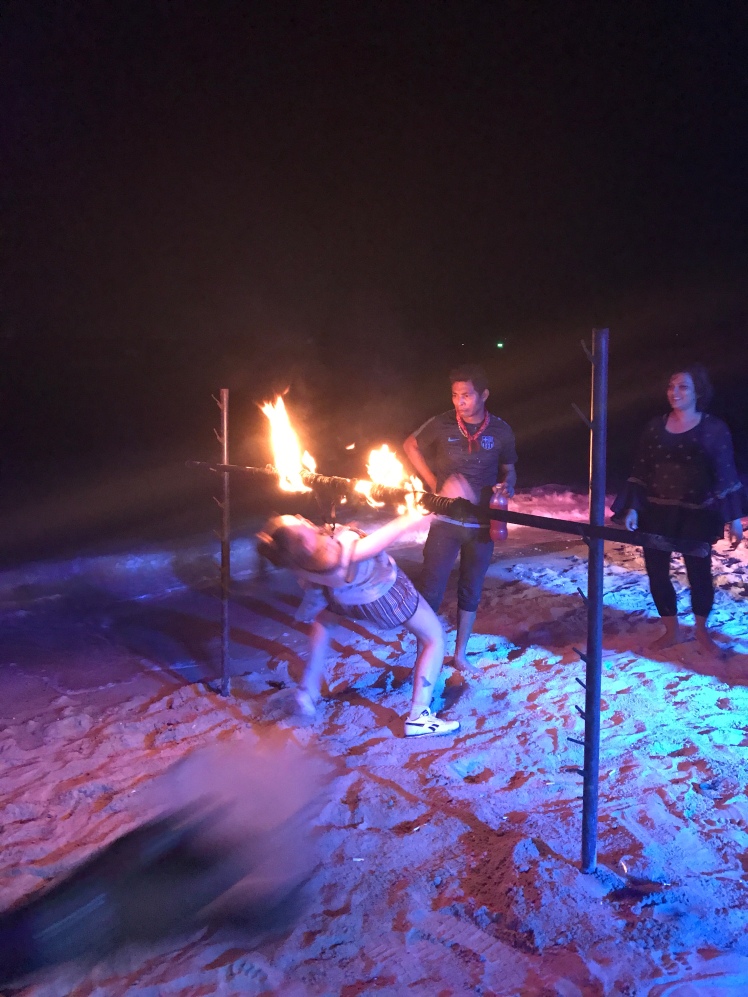 I decided to switch hostels in the morning. I caught my German friend from yesterday in the morning and she was switching hostels to be closer to her dive school. I felt like mine wasn’t very social and Maik’s hostel had an opening and so I walked down the road and checked in.

The morning was a chill one as I got situated in my new room and met some of the other backpackers. I loved this hostel a lot because it was very social but also relaxing and not a super party one since everyone was mostly there for diving.

Then, Maik and I linked up for the day. We rented a motorbike and drove off to the south of Koh Tao to Shark Bay, a beautiful beach known for sightings of whale sharks. We set up our towels under the shade and went straight to chillaxing. I thought the beach was more beautiful than Sairee Beach as it was cleaner and more remote. 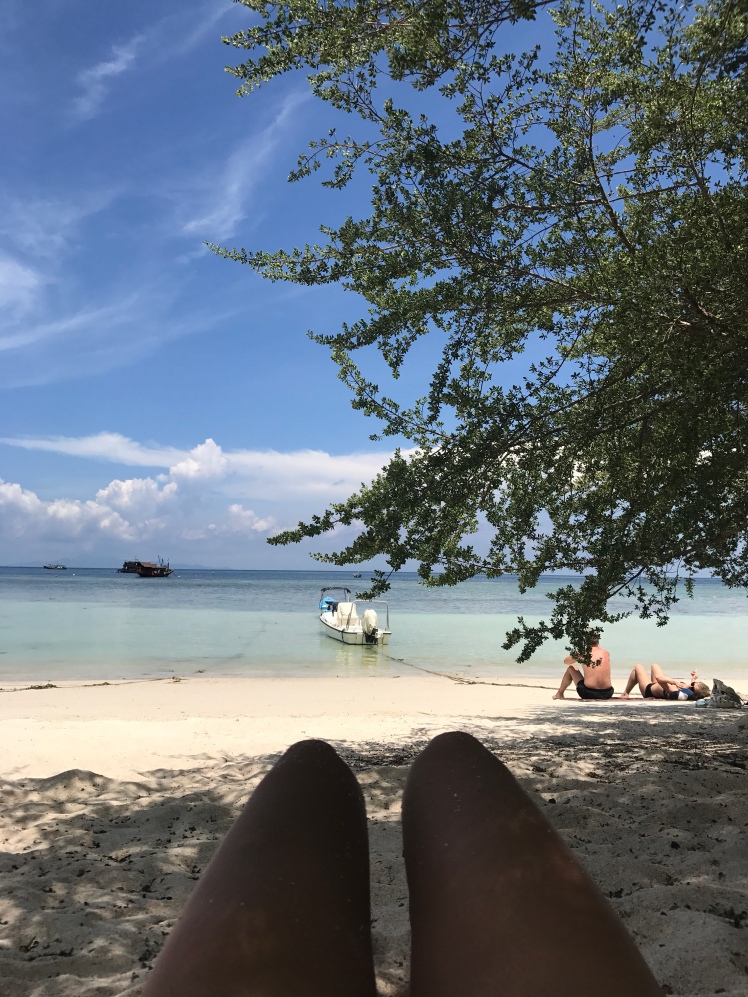 We went snorkeling to try and catch the whale sharks! We unfortunately didn’t see any, but were so happy to be in the warm, blue water and see the marine life below…the water is actually this crystal blue color. 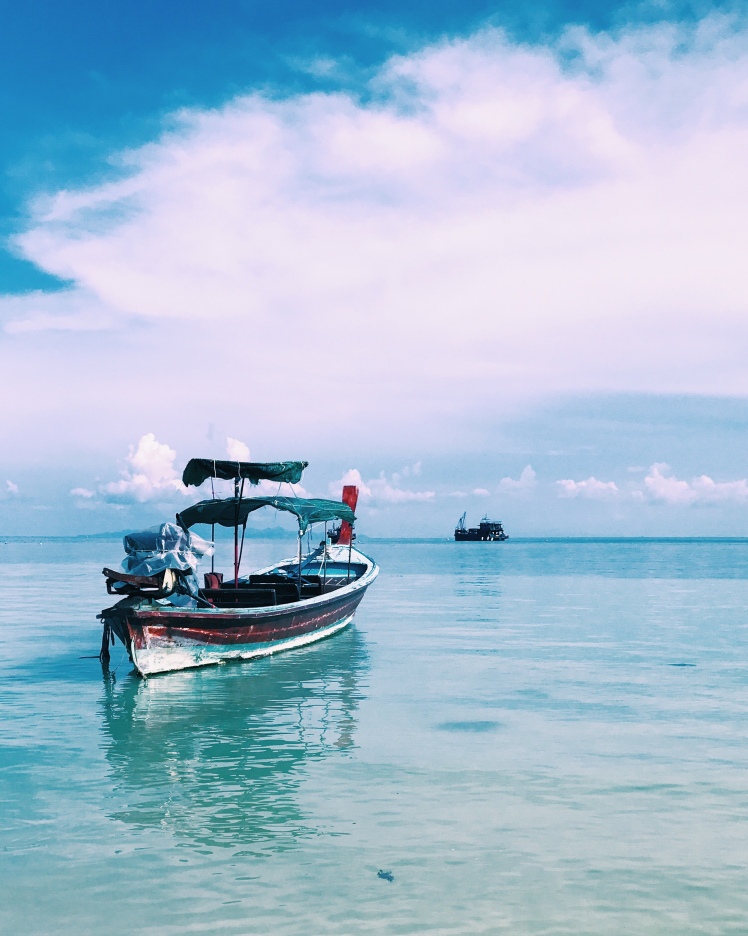 Another relaxing day on the beach was just what I needed. Afterwards, we drove back to town and dropped off our stuff, just to hit the beach again for the sunset. I wanted to go back to the techno music-playing bar front the evening before since I loved it so much, and that’s what we did.

Afterwards, Maik and I cleaned up and then got some dinner at awesome hole-in-the-wall restaurant right across to our hostel. It’s super dingy and simple, but always packed with people since the food is so yummy. Their roast duck is to die for. Maik said he had eaten there 5 times this trip!

After dinner, we ran over in the rain to Fishbowl Bar, where we went a few nights ago. Another live band was playing and the bar was just as poppin’! We danced, drank, and enjoyed our last full night in Koh Tao 🙂

My second to last day in Thailand was mostly spent traveling. Since I was no longer going to Phi Phi, I also gave up my flight from there to Bangkok, from where I would be flying home. And so, I decided to tag along with Maik on a bus ride to Bangkok the day before my flight. I thought it was better to get to Bangkok a day early just in case any delays happened on the day of; god forbid I miss my flight home!

The morning was as lazy one. I caught up on my iPad at the hostel, got my nails done ($3 manicure = YES), and walked around Koh Tao one last time before saying goodbye to my home from the past week ❤ 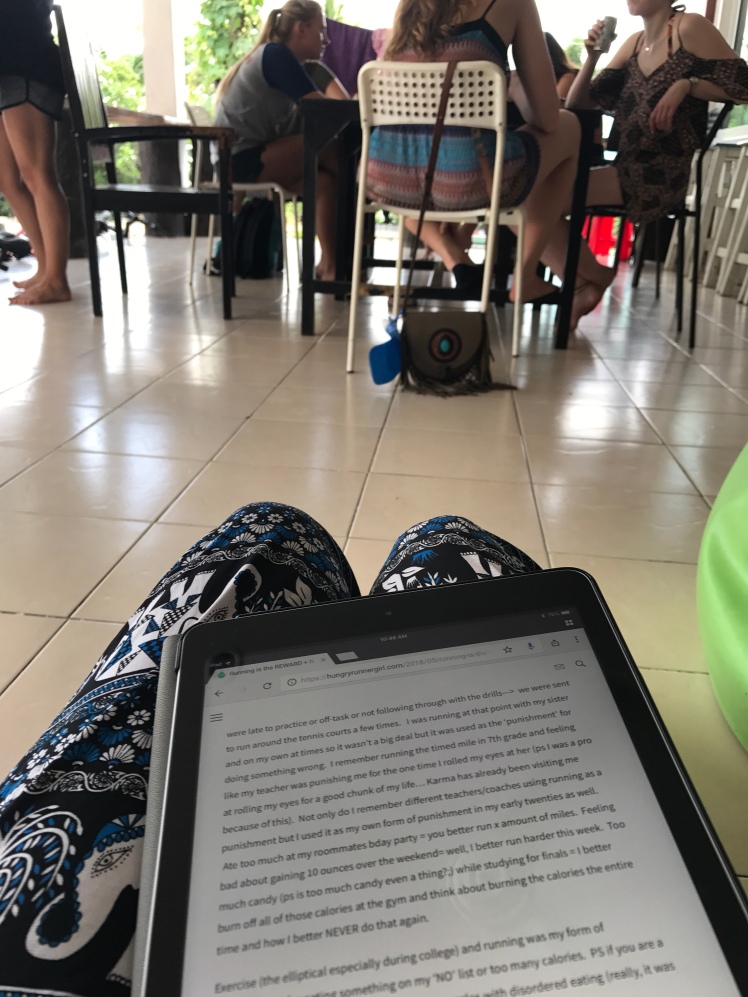 The rest of the day was a long one spent on a 2-hour ferry and then an 8-hour bus ride. We arrived at Bangkok around 12:30pm and checked into our hostel. I thought we would just have to go straight to bed given how all the other cities I’ve been to in Thailand go dead at midnight, but Bangkok was brilliantly awake and filled with people on the streets eating outside, drinking, bar-hopping…and so Maik and I decided to grab a drink!

It was so nice to be part of Bangkok’s night life for one night. I LOVED the energy of the city and SO appreciated going out and not just spending my last night in Thailand on a bus. I originally didn’t have any interest in Bangkok and omitted it from my itinerary since I knew I wanted to chill in smaller cities/villages/beach towns, but after spending 3 weeks in Thailand, I had such a newfound appreciation for its culture, and now I was SO glad I got to see Bangkok as well.

We plopped down at a small “bar” that just on some tables and chairs on the streets – like the whole-in-the-wall restaurant in Koh Tao, Maik and I have loved these small, modest places that don’t look to special but happen to be the most fun. If it says anything at all, this place was right across a 7 Eleven that also set up chairs and was actually super lit with people drinking away, ha #onlyinThailand 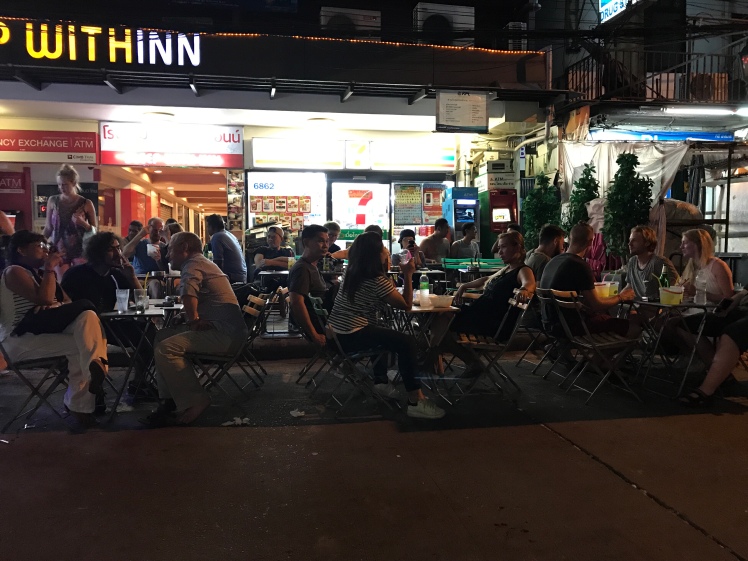 The night was really the perfect last night in Thailand. Being some place new, the vibrant energy of Bangkok, the relaxation of a cold beer after being on a bus for 8 hours…everything about it was perfect, and I was just so happy to be spending the night with Maik too.

After such a fun night in Bangkok, I woke up super stoked to spend some time in the city during the day before my flight at 5:30pm. I had all morning and half an afternoon and I was NOT going to let it go to waste!

I woke up early and had breakfast at our hostel and first took a short walk on my own to get a feel for the city. Bangkok during the day had just as much energy as night! Loads of food, shops, stands on the streets selling everything under the sun, tour guides trying to lure you into seeing things…it was a bit overwhelming but I quickly got use to it.

Then, Maik and I met up and we started with walking down Khao San road, the most popular shopping street in Bangkok’s “old city” and right near our hostel. I got some last-minute shopping in as everything is MUCH cheaper in Bangkok, to my surprise.

Maik had already spent a few days in Bangkok in the beginning of his trip, and it was so nice to have my own tour guide and not worry about directions. We passed by Grand Palace and walked around its perimeter.

One very unique thing about Thailand is how much people love and respect the passed away king and his entire family. Throughout the entire country, on all the streets, and at every restaurant and home are pictures of the king. At first, I thought this was mandated by the government, but they really were from people voluntarily putting them up out of respect for him. How special.

We checked out the river that runs along Bangkok.

Lots of walking through alleyways and markets. I don’t know how people decide on where to shop because there are just SO many options and crap out there!

Last pad thai of this trip. I’m pretty sure I ate it almost every single day, and will continue to eat it at home. It never gets old for me.

Then, we killed some time getting Thai massages and went back to the hostel. I grabbed my things and Maik and I said our goodbyes.

And just like that, my amazing trip to Thailand came to a close. I have so many emotions going through me, mainly feeling incredibly grateful for each and every new experience, new friend, beautiful places seen, and opportunities to learn so much about myself. I will go into more details on my thoughts on this trip in a later post because I have a lot of processing to do, but I can say for now that this was easily my favorite trip I’ve taken so far…Thailand absolutely changed my life. I will never ever forget this amazing adventure and the people I shared it with ❤

Hello, I’m Charlotte! I’m a 6x marathoner, 11x half marathoner, and 2x triathlete. This blog focuses on my journey training for races, balancing life as a working gal in San Francisco, my wonderful friends and family, and all the beauty in between. Thanks for stopping by :)

Bech day☀️
Whole weekend w/ these views and I did not hate it
Two mountain souls🏔❄️💕
I couldn’t ask for a more brilliant trip...surfing the waves, hiking the lush jungle, and soaking in the hippie vibes of my soul town. Thank you @doughyjoey5 for being my adventurous, down-for-anything partner on this journey. —> p.s. I blogged everything! (see link in my bio)
A fave memory was driving a ridiculous golf cart through the underrated roads of Sayulita - from lush jungles to the rocky coast to the hills filled with beautiful casas of the 1%. Mad special.
%d bloggers like this: